“The Dream of the Burning Boy”: Another Thespian Success 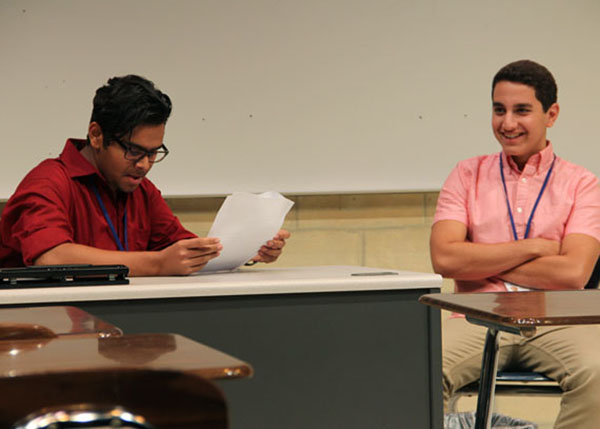 A school struck by tragedy, an English teacher hiding a secret, and friends torn apart. “The Dream of the Burning Boy” takes these subjects and produces a performance that is worthy of applause. This play is different from the ones that the thespians have performed in the past; it is much more serious and has more of a realistic theme that the audience instantly connects with. The cast, only consisting of seven members, did a great job with coordination, and the play was held up nearly to perfection. While the play may have seemed to begin slowly, it built up to a shocking climax from which it turned into a twisted tale of secrets and grief.

The play begins with high school student Dane (junior Andre Eramia) having a heated conversation with his English teacher, Larry Morrow (senior Surdeep Chauhan). Dane appears to be asking for Larry to review his paper once again, and possibly give him a better grade. Larry gets upset and insists that he cannot give Dane special treatment, while ignoring Dane’s assertions that he has a lot going on with his life at the moment. Larry raises his voice at Dane, but while Dane is leaving, he apologetically asks him to come by again the next day, so they can talk about the paper. Dane leaves, and suddenly a crash is heard in the background, and, in reaction, Larry runs out to see what has happened. Scene changes, and now we’re back to Larry’s classroom, in which he is having a dream about Dane, and the school’s guidance counselor, Steve (senior Daniel Bedoya), walks in with a poster reading “Everything Will be Alright.”

Steve tries to be nice to Larry, who was once his English teacher as well. However, as much as Steve tries to get Larry to talk about his feelings and express some emotion about what had happened in their school just a couple days ago, Larry refuses to admit how he truly feels. He simply continues to show a very dark facade, and is obviously very disturbed, which prompts him to lash out at Steve, who is only trying to help. In this scene, we are confirmed of the fact that Dane, the student Larry was having a meeting with, had a sudden brain aneurysm in the hallway, moments after leaving Larry’s classroom, and died. This event led many students to be traumatized, so many were on trauma leave.

The most affected are Rachel (junior Julia Nejman), Dane’s sister, Chelsea (junior Sherlina Chauhan), Dane’s girlfriend, and Kyle (senior Yassir Dasser), Dane’s close friend. All three express their grief in very different ways. Rachel refuses to come to terms with it and is instead very angry as to how people are so sympathetic and try to show care when they didn’t even know her brother. She disguises her true feelings by putting up a tough face and being rude to everyone, especially Chelsea, who she had hated since the beginning. Chelsea is upset and trying to come to terms with the death of her boyfriend, but she is also harboring a secret of her own that makes her more guilty than sad, the fact that she had cheated on Dane with Kyle. Kyle, the fun and playful boy, attempts to be a close friend to Chelsea, while also trying to flirt with Rachel, who does not take him seriously at all. When all three of these frenemies are in a scene together, the play takes a turn for witty, but sad at the same time. Neither of them like each other very much, and due to the different relationships each had with Dane, each also have a different way of handling the grief.

After several angry scenes between Rachel, Chelsea, and Kyle, the climactic moment approaches. Rachel eventually loses her cool and accuses Larry of always treating Dane better than her. She does not understand as to why he was always so much closer to Dane, and why Dane was his favorite, and she goes as far as accusing Larry of being a pedophile. However, after several moments of yelling, Larry blurts out that Dane was his son, but he could never be his dad. Shocked, Rachel attempts to deny the truth. Intermission rolls in.

The second half of the play consists of everyone slowly coming to terms with their grief, especially Larry. After a compelling conversation with Dane’s mother, Andrea (senior Susie Montoya-Quinchia), who was also Larry’s lover once, Larry realizes that he could have been a better dad to Dane if he had tried, considering the fact that Dane had been there all along. Larry also realizes that there were many things he could have told Dane, but never had the chance to due to his fear of Dane not accepting him as a father. In a dream sequence, Larry revisits the last time he saw Dane, and plays it over in his head as being nicer, and spending a couple more minutes with his son. Steve eventually visits Larry again to try one more time to make him feel better, and explains a dream interpretation he had read in a book by Sigmund Freud, in which a father sees his son in a dream as a burning boy, being able to spend a couple more moments with his son, whose coffin had actually been burning in another room. This pushes Larry to finally admit all that he had wanted to say to Dane, and all he had wanted to do with Dane. Rachel also comes to terms with her mourning and writes a eulogy that describes how she felt about her brother.

The realistic way this production is played out makes it one of the best serious pieces the Thespians have ever put on. It combines dramatic and realistic elements in such a way that it is difficult to not feel emotionally attached to the characters and not feel disheartened by the events that occur. Each scene in the play consists of a lesson to be learned, whether it is about grief, truth, secrets, or just relationships in general. The actors make every moment seem real.

Bedoya’s cheerfulness and optimism let the audience feel a little better about the events that had happened, which is exactly what his character entailed. The way he tried to make everyone feel better, whether it was by treating Larry to pizza or singing a song on his guitar for Andrea, Bedoya fulfilled that character to a very high extent, and I could feel his optimism resonating throughout the theatre. Chauhan’s character as the brooding Larry, someone with a sad past and possibly sadder future was remarkable. He really grasped the act made us feel what the character was supposed to be feeling. Nejman, Sherlina, and Dasser also acted out their parts to a great ability. Nejman’s attitude as a “I don’t care, but I really do” character really made her stand out, especially since it was a character so many teenagers could relate to. Dasser’s acting out of the funny, playful guy showed who Kyle really was, and he added the comedy to the otherwise tragic story. Sherlina’s role as a mourning girlfriend was perfect. Montoya-Quinchia’s acting as Andrea, the mother, was handled very well and I could get that motherly vibe from her directly. She really resonated with that character, and all that it entailed as a grieving mother who was also very angry with someone she had once cared about long ago.

Overall, this play was definitely a play everyone should have gone to watch. It reflected the hardships that many have to go through due to a tragic event in such a way that anyone could relate to it. The play also had a profound effect on portraying secrets, and how secrets can lead to even more grief, or perhaps less grief. The overarching themes and subjects of this production allowed the audience to relate and connect, so we really did become the eighth cast member. The language and content, even with the swear words, added a level of maturity to this production that was perfect for high school students. “The Dream of the Burning Boy” was a spectacular way to start off Niles West’s theatre’s year. Congratulations to the cast, crew, and theatre director, Andrew Sinclair, on a great beginning.