Choosing to Stand Up: My Reflection on Stand Up Week 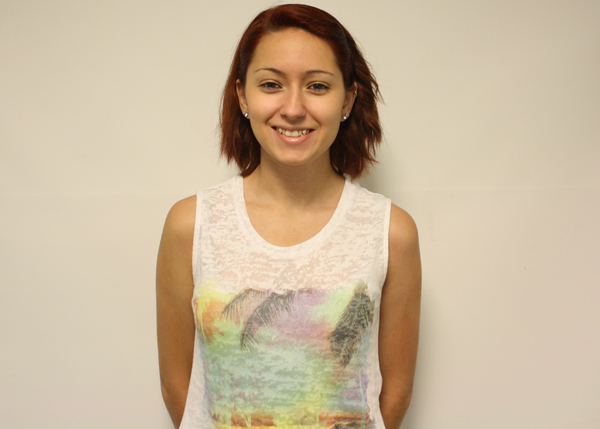 Senior Michelle Sproat on the making up gym classes.

As a NAMES assembly leader for the past two years, I was very pleased that Niles West recognized National Stand Up Week (November 17-23). This past week I saw students participating in the anti-bullying activities held outside the cafeteria. The activities included putting teardrops on silhouettes hanging up outside the student commons, and putting Band-Aids over the tears with things that people wish someone said to them when they were being bullied. Also, the student body was in a sea of blue shirts on Wednesday.

Being in my senior year at West, I was sure we had never done anything like this before. It was refreshing to see so many participating in these activities. I am also a freshmen homeroom mentor, and the number one thing that the girls in my homeroom said after the NAMES assembly this year was that they wished we did more events like the assembly throughout their high school. Recognition of Stand Up week could be the first step in achieving that goal.

Although our recognition of Stand Up week was impressive for its first year, I still think there’s more we need to do. The issue I had with how Stand Up week was addressed this year, was that there wasn’t much light put onto what we need to do in the future. After this week ends, will people take off the blue wristbands and shirts and tuck them away until they’re asked to bring them out again next year?

I did notice throughout the week that although we dressed up in blue and participated in the activities that were held, no one discussed the issues that go on with bullying. Assistant principal Kendall Griffin, was heard over the PA system throughout this week talking about bullying and how we shouldn’t mistreat people, but the messages weren’t carried on through the students throughout the day. In the hallway I heard a girl say to a peer, “When this week is over I’m going to go back to bullying you, just wait and see!” Whether she was joking or not, the fact that this week’s events could all be brushed under the rug bothered me.

Bullying is an issue that is very serious and should be taken very seriously. In an article from earlier this week by Rand Jasser, guidance counselor and peer mediation sponsor Yvonne Miller was quoted that about 555 students (or 21%) reported they were bullied or marginalized last year at Niles West. In order for this number to decrease, I feel that we need to step up our game with Stand Up week. Do I, as well as many other students, greatly appreciate the events from Stand Up week? Yes. Do I think we can do more? Again, yes.

There are a few ways I feel Stand Up week should be changed in order to be more beneficial in years to come. The first way is to talk about how to recognize bullying. A common reason that bullies act the way that they do is for the sheer reason that they don’t realize they are acting like bullies because s0me may view their actions as a “joke” and that they’re just “kidding around”. If the school were to discuss specific situations of bullying, then people may be able to identify their behavior and change it. A second way would be to specifically show students who they should talk to if issues of bullying arise and where these people are located. Peer mediators and school social workers are the best people to go to during the school day to talk to. My last suggestion would be to have further discussions in class about bullying during Stand Up week. Talking about bullying shouldn’t just be involving the students, but the teachers and other staff members as well.

Some words of advice to my fellow classmates: don’t be afraid to discuss bullying. Whether it is with teachers, administrators, parents, or friends, you should not be afraid to speak up. Just remember that Niles West is a safe environment with many places you can go to talk to people who are willing to listen and help. So here’s to the future, in hopes of decreasing the percentage of people feeling bullied in our school and increasing the awareness around keeping our school a bully free zone.