Andre Eramia: Energy “No One Else Has” 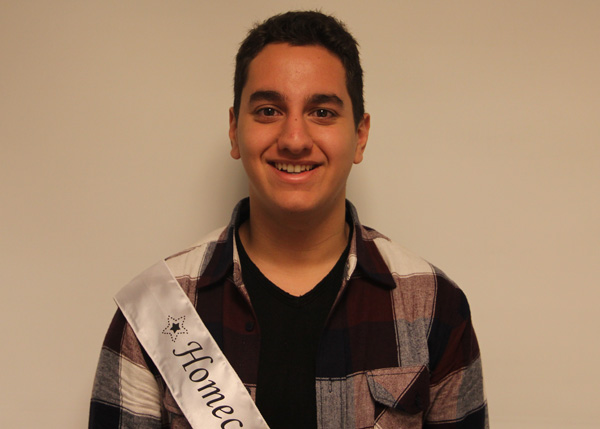 Senior Andre Eramia has been involved with theatre since he was in junior high, and an accident led him to starting theatre in high school.

“I did plays in junior high and it was much more relaxed there,” he said. “I was going to play football in high school, but I broke my arm and I didn’t want to not to do anything. My junior high teacher pushed me to do it.”

He auditioned for his first high school play the summer before his freshman year.

“Before school started, there were auditions for the show and I made the first show,” Eramia said.

Eramia also participates in more than just the acting side of theatre.

“Usually I’m in the shows, but I do drop in crew and work with costumes and lighting and just go in and out,” he explained.

Theatre can get stressful and at times be overwhelming, but Eramia is glad he decided to be a part of it.

“It takes the most time because you’re there every day until six, and our biggest break is a week. It gets frustrating but I knew it was what I wanted to do. I’m happy I stayed because I’m president of the thespian society and I’m glad I decided to do it because it all worked out,” he said.

While he doesn’t want to pursue acting outside of high school, he hopes it is something he can continue.

“I’ve thought about it, but I’m going into business. But I still want to do it on the side if I have time,” he added. “It’s something that will always be with me and that I’ll never forget.”

The friends he has made through theatre appreciate him and the positivity he contributes to it.

“He is always so positive and so energetic that you cannot help having fun when you’re around him,” senior Scott Albaum said. “He is our president, so he has a lot to do for the department. He is always a vocal member of the department and always shares his ideas which help make the department better.”

Eramia has become like a brother and mentor to some of the younger members of theatre as well.

“It’s always fun working with Andre — he’s like a big brother to me. He is always energetic to come to rehearsals and makes me want to work and appreciate what we’re doing,” sophomore Alana Knobel said. “We have so many inside jokes and whenever those jokes come up in theatre or anywhere is my favorite memory with him.”

Knobel also appreciates his qualities that help him in being president of the thespian society.

“Andre brings a certain energy to theatre which no one else has and he always goes into something with a positive outlook. He also has a really great leader quality, which makes him a good president. I’m really going to miss him when he leaves — I don’t have a relationship with anyone else like my relationship with Andre,” she said.