Sproat Out as President; Board Votes to Investigate Recent Controversy 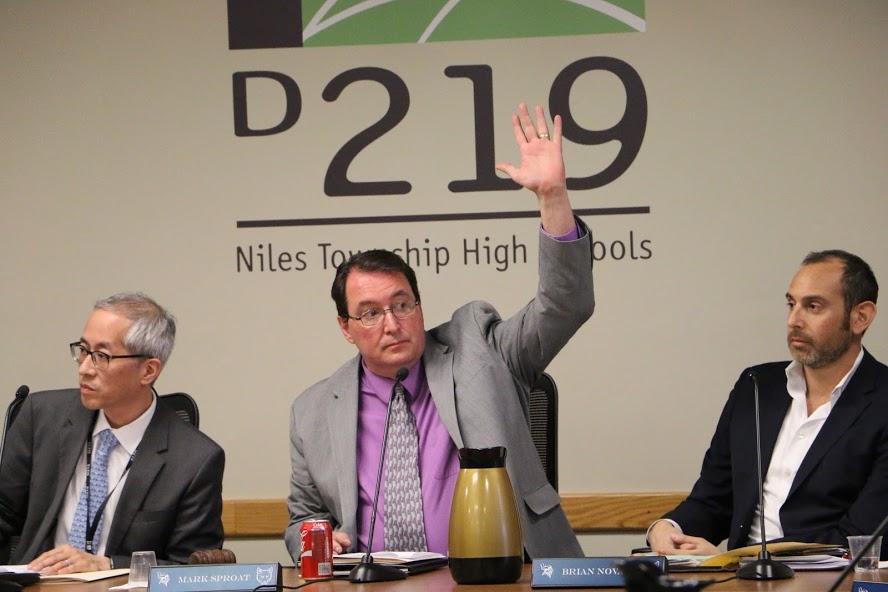 The district 219 board of education elected its officers for the upcoming year at the reorganization meeting on Tuesday, May 2 in the administration building.

The board officer elections come following a controversy surrounding former board president Sproat, who has been accused of allegedly influencing his daughter’s basketball team at Niles West and harassing the coach, Anthony Konsewicz.

Konsewicz was present Tuesday night to elaborate on the issue.

“It is rather embarrassing to hear people tell you that you are going to be fired from something that you really love to do,” Konsewicz said in his public statement. “It also makes the challenging job of coaching even more difficult when your credibility is being publicly questioned, and in each case, this information originated from the same source.

In his first public statement on the matter since his resignation, Konsewicz shed light on the situation, which has been a matter of controversy for several months.

“Let me be clear: the reason that I resigned as basketball coach is due to the continual harassment that has been instigated by Niles West class of ’84 Mark Sproat,” Konsewicz said. “I have respectfully served this community and district 219 as a coach for the last 21 years. I deeply care for this school and the students of this community. I intend to continue to faithfully serve 219 as a physical welfare instructor.”

Konsewicz also commented that he, with the support of the teachers’ union, had “given the board the courtesy of handling this situation in closed session” in the hope of avoiding “any public embarrassment.”

Following Konsewicz’s statement, all board of education members, including Sproat, formally voted to investigate the matter. Despite this, Konsewicz told NWN after the meeting that he was not totally satisfied with the outcome.

“I just came to say what I finally wanted to get off my chest, and I came to say that. But [am I] completely satisfied [with the board meeting’s outcome]? No, I’m not,” Konsewicz said. “I think there was no mincing words this time, and I think it was pretty clear cut, the reason I stepped down.”

Parents of other girls’ basketball players also spoke on behalf of the program during the audience-to-visitors section.

“This is personal for me because one of my children did play basketball. My daughter made the varsity basketball team as a junior, but she didn’t see much playing time. There were times after basketball games that I was furious with coach K, because he didn’t play her enough. Yes, I wanted to challenge coach K about not playing my daughter, but I knew there was a bigger lesson for my daughter to learn; be respectful,” basketball parent Joan Moy said. “The following year, my daughter worked hard, and it payed off, putting in countless hours in the off-season to better herself. She came back her senior year as a starter, captain and with all-conference honors. Let’s pretend I am the board president, and I use that position to intimidate [for]  my daughter, so she could have everything she wanted, more playing time, ability to be on the highest team, what would she learn? That she is a brat. That she can do anything she wanted because she was the daughter of the board president.”

Despite this, Sproat adamantly reaffirmed following the meeting that he had not contributed to Konsewicz’s resignation in any way.

“As I’ve said all along, I vehemently deny anything, and the truth will come out,” Sproat said.

Sproat denied that he had any contact with Konsewicz other than a meeting that he left in 2015, after his wife, June Sproat, deemed it necessary.

However, Sproat was entirely supportive of the board reorganization.

“By no means [do I feel I’ve been wronged by the board of education officers vote]. We wanted to do this as a board. As you can tell, every single position has been switched. And we wanted to do that because of the fact that prior board members were in their positions for 19 years; that’s a long time. We want other people to have the right to experience those positions; this is completely a board decision,” Sproat said after the meeting, before elaborating that he felt very happy for all the new officers. “It had 100% to do with the board.”

An earlier version of this story contained an inaccurate quotation from parent Joan Moy.

Contributions to this story made by George Panoutsos

Video made by Inana Zomaya