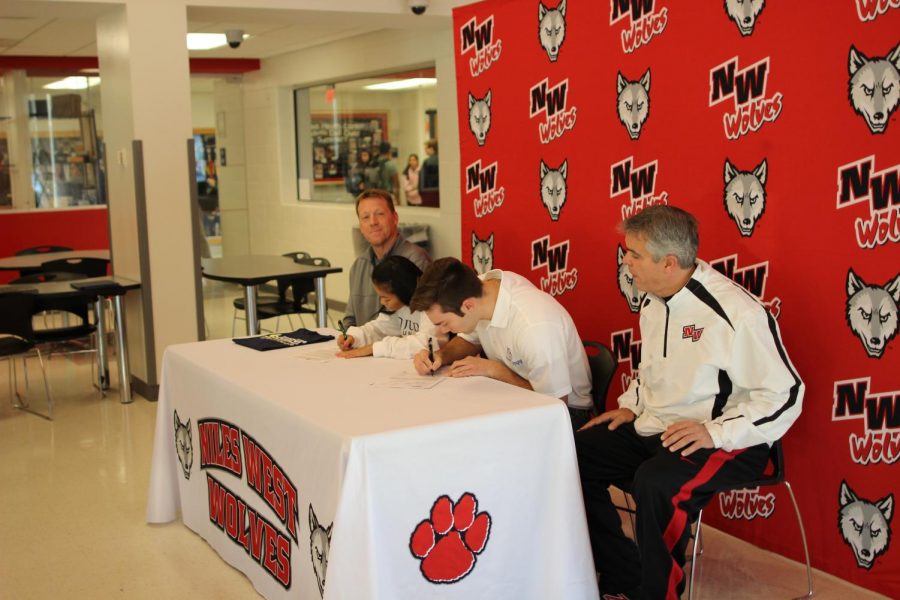 As the college admissions process comes to an end, the race to finalize college decisions is on Nov. 8th, seniors Grace Nguyen and Sam Butera will be officially committing to universities to pursue their future in college athletics.

Butera will be committing to St. Louis University and believes both his baseball and academic career will grow at this university.

“I will be going to St. Louis University in Missouri,” Butera said. “It is a medium-sized Division One program. They have around 10,000 under-graduate students and they are currently in the Big East conference. I chose St. Louis over other offers due to academic reasons mostly. St. Louis is regarded higher in academics than some of the schools I was talking to and that was a big thing of what I was looking for- not only going to play a high level of baseball, but receive a high level of education as well.”

Butera has been playing baseball since he was five years old, and is excited to have the opportunity to play at the next level.

“Not only is it [baseball] helping me pay for college, it’s just something I incorporate everyday into my life,” he said. “I honestly couldn’t see myself not playing.”

Although planning to major in Business and Marketing, Butera is hoping to enter into the MLB draft after his junior year.

“I’ll probably go into business and marketing. I’m still undecided about what I want to do specifically in marketing, but I still have time. Once I get closer to school, I’ll figure that out. Depending on how my first two years go, I’ll possibly enter the draft and see how that plays out. If I get lucky enough, my skill progresses and something ends up happening or I get drafted then that’s fantastic. But if not, throughout the four years of not only being in their academic programs but their baseball programs, I’ll build a lot of networking and connections throughout their business aspect of school.” Butera said.

Nguyen will be committing to Judson University and is looking forward to growing as an individual and tennis player.

“I committed to Judson because it fits my needs and wants. Tennis has impacted me in my life because it has taught me to stay humble. I’m looking to major in sports marketing and I believe Judson will help me because playing tennis will help me with future jobs.” Nguyen said.

Athletic director Kendall Griffin is proud and excited for the two athletic commits and is happy that their athletic career at West will be continuing onto the next level.

“It feels great to know we have student-athletes that will be able to continue their athletic careers at the collegiate level. I’m always excited for them, their families, and coaches because as a former college athlete, I know how much work, time, energy, and effort has gone into getting to the next level. Finally, I’m happy that the student’s time here at Niles West has impacted their ability to move on and compete at the next level.” Griffin said.

Griffin also admits that he believes competing in the CSL better prepares student-athletes for the collegiate level.

“I never place any expectations on how well our student-athletes will compete at the next level,” he said. “I would say that due to their time here at West and the competition level they’ve had playing in the CSL conference for four years, I think it gives our students an excellent chance to compete well at the next level. The CSL conference is one of the best conferences in the state of Illinois and provides our athletes with the best opportunity to compete against top level competition each and every year.”

As both a former collegiate level athlete and the athletic director, Griffin offered some advice for aspiring athletes who wish to perform at the next level.

“Work hard. Train hard. Listen to your coaches and parents. Be willing to do the small things it takes to be great. Make the most of every opportunity you’re given. Don’t make excuses. Be willing to compete each and every day. Finally, Respect All but Fear None.” Griffin said.