My Experience at the 2018 Women’s March 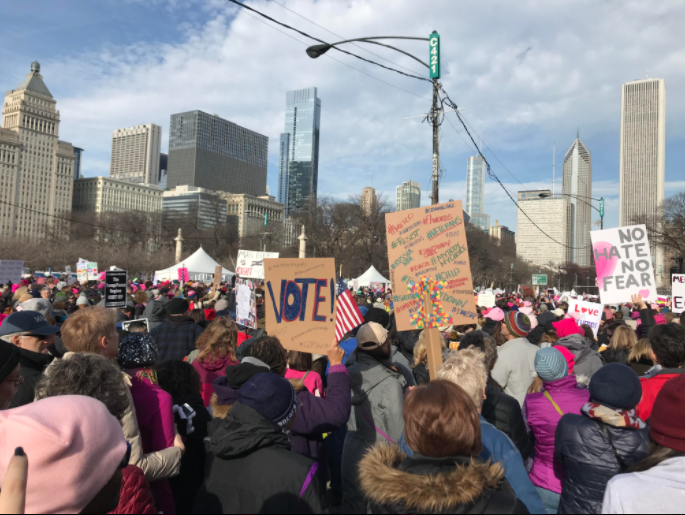 Signs at the 2018 Women's March in Chicago. Photo by Ella Ilg.

I am by no means an avid feminist, and the most social justice work I do can be summed up with the statement that I have a Tumblr account. I’m no SJW (social justice warrior)  and tend to lean in the more moderate left sector, so I was kind of nervous about the kind of feminists I’d see. I did, however, attend the 2018 women’s march in Grant Park this past Saturday and I have to say, it was great. There weren’t a lot of “White Feminists,” a category of women who don’t go the extra mile to make sure they’re talking about all women, not just the cisgendered, middle class, white ones. Nor did I see many radical feminists, who tend to be vehemently transphobic and refuse to let trans women into the community. What I saw was a lot of peaceful men and women, going out and showing their support for what they believe is the right thing to do.

My group was able to get to one of the projector stages, which felt like a million miles away from the main stage. I was expecting it to be crowded, but this was on a whole new level. There were an estimated 300,000 people at the rally and march which is pretty outstanding. There were 90 year-olds in motorized wheelchairs, babies in strollers, and every age in between. My favorite thing was seeing 5-year-old girls on their mothers’ shoulders screaming “Hey Hey Ho Ho Donald Trump has got to go!” whilst probably having no idea what it means. The police were nice, and I didn’t come across a single violent altercation.

I came across women dressed in suffragette outfits and costumes from The Handmaidens Tale, huge paper-mache Trumps and Pences, and amazing posters. I didn’t even know the women’s march was happening again until last Thursday, while some of these people had clearly been prepping for weeks or even months in advance. Some of the guests at the main stage included one of the stars of Chicago Fire, the female cast of “Hamilton” and several women from the Chicago and state government.

The excitement on the faces in the crowd was palpable, and while cutting through the crowd to move forward, I was never pushed or shoved the way one might be when trying to cut through a mosh pit. Everyone was cheerful, and you could pretty much strike up a conversation with anyone you ran into, which my friend and I did quite a few times. If one person started a chant, within a minute you could get over a hundred people chanting along. It was one of the most positive atmospheres I’ve ever been in. Everyone left and right was asking me to register to vote, and unfortunately, I had to keep turning them away because I was born a month too late.

Aside from one guy holding up a gruesome image of an aborted fetus accompanied by big angry text, I did not encounter any of the anti-protesters. Some of the cops were even wearing little pink wristbands and were all pretty friendly, which was certainly unexpected. Everyone there was united under the same goal, unlike similar events like the Pride Parade, which has turned from 99% LGBT and 1% straight into 50% LGBT and 50% drunk girls looking for an excuse to get wasted in public. It was wholesome and purposeful, and not an excuse to party excessively.

Despite my car breaking down later when I was trying to get home, it was an overall satisfactory experience. I would recommend anyone interested in sign making, feminism and unity to catch a train downtown to march next year.