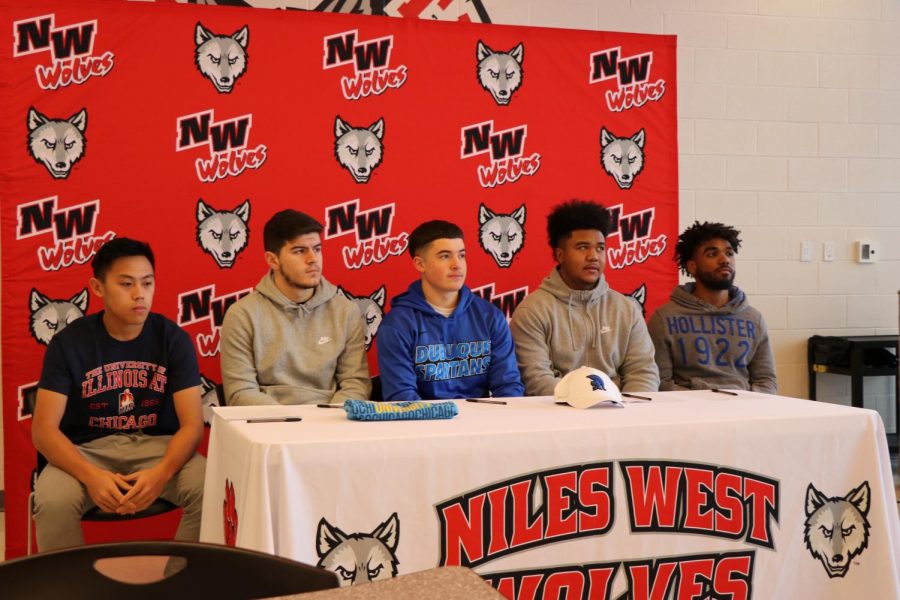 Senior Aaron Nguyen signed with UIC (University of Illinois at Chicago), and senior Edin Sabovic signed with North Park University, both continuing soccer. Sabovic explains his everlasting love for the game which motivated him to play at the collegiate level.

“Soccer has been a huge part of my family and for me since the age of four. Playing soccer isn’t an option for me, it’s a must. I chose to continue my academic and athletic career at North Park University because of the diversity. Being around the players, it was very comfortable and welcoming from the start by making me feel like I’ve been playing with them forever,” Sabovic said.

Along with outside facilities and clubs helping athletes become the best they can be, Niles West also has one of the best facilities for high school athletics and a great coaching staff. Athletes are provided many facilities to use to their advantage, and the coaching staff always wants to see their players succeed on and off the field no matter what they’re trying to achieve.

“Everyone has been a huge support to me, from my family to teachers and most importantly, my coaches. I’d like to thank Coaches Milo Cejovic, Bill Papaioannou, and Bosko Bjegovic for working by my side since sophomore year. They’ve supported me physically and emotionally as well as help me persevere to achieve my goal of playing college soccer. I’m very excited to play college ball, to challenge myself, and to see what I can do at this new level,” Sabovic said.

Coach Cejovic has been coaching Sabovic for three years in a row, watching him grow throughout that time and is proud of the player and person he has become.

“He’s been our leader and the one who’s helped the younger boys get acclimated to playing on the varsity level. He’s always the first one at practice and the last one to leave and I believe that he’s going to do a great job at the next level. He has the right mentality and the Niles West coaching staff has prepared him well to play at the next level, what to expect, and how to train and behave,” Cejovic said.

Seniors Davion Lewis, Isaiah Elhamti, and Jaylen Bryant all have signed to play football at the collegiate level at the University of Dubuque.

“I am very excited to compete at the next level and dedicate the next four years of my life to the game I love the most,” Elhamti said. “Football here at Niles West has allowed me to create lasting friendships with some great people and my best friends, Davion and Jaylen. I’m looking forward to this new experience of playing football at the next level with them,”

Football Coach Jesse Pierce is proud of his three players for playing at the collegiate level next year and feels that the leadership qualities shown in his past fall season will help them be successful at the next level.

“I am really proud of them for taking the initiative and this opportunity to play at the next level,” Pierce said. “I think they all were leaders in their own way for our team this season. They primarily led by example through their work ethic, and just showing up with a positive attitude think those same traits will help carry them forward next year.”

Athletic director Kendall Griffin shares his thoughts as to how the signing of these athletes to play in college reflects how the Niles West athletic program has prepared them to continue on their athletic careers elsewhere.

“I think it is great for any athletic program when you have athletes moving on to play at the collegiate level. Directly, it reaffirms what our coaches and kids are doing on a daily bases for a four year period to help propel them to the next level. A lot of the credit goes to the student-athletes, but also their coaches, teammates, and families to get the support that helps them play at higher levels,” Griffin said.

Along with the signing to commit to colleges for these five athletes, the athletic department also celebrated senior Mia Piljevic, swimmer, on winning the Country Financial’s “Athlete of the Month” for December.

“Swimming has been a large part of my life for the last ten years. It has opened new doors and opportunities and has allowed me to meet new people. I’m very honored to have been chosen for this award; it’s been a great experience as a Niles West wolf and I love representing the school,” Piljevic said.

Piljevic has had a strong supportive team by her side through the years, pushing her to improve.

“My coaches have definitely helped me succeed as an athlete, especially as a student-athlete. It’s been a great experience competing in Illinois, one of the most competitive states in the country. I’d most importantly like to thank my family, teammates, and most of all, Coach Jason Macejak,” Piljevic said.

Griffin explains how prestigious Piljevic’s newly earned title really is and how this win positively affects the school’s athletic reputation.

“There is a student-athlete of the month in different regions throughout the state and Mia was nominated by her coaches. Basically, it came down to who got the most votes because a lot of great athletes were nominated, but Mia ended up coming out on top, which is a great honor for her and the school,” Griffin said.

All six of these athletes have contributed to the renowned Niles West athletics program and will continue that legacy to the colleges of their choice next season. Congrats to each of these athletes on their outstanding achievements and good luck to all of them next year.