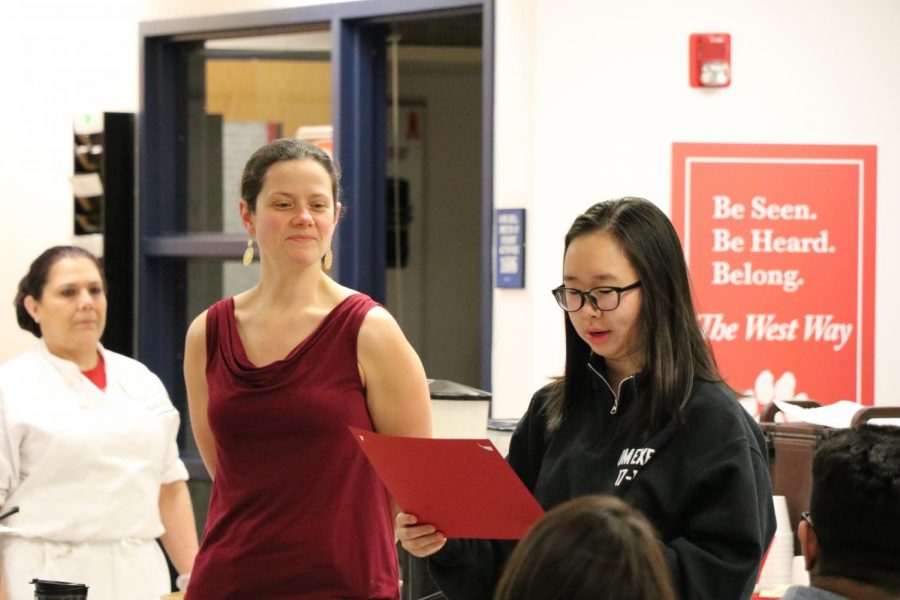 The biannual “You Make a Difference Breakfast” for the faculty nominated by students was held in the morning of Wednesday, Feb. 21 in the Student Activities.

“It gives the students an opportunity to nominate staff that they feel have made a difference in their school life,” coordinator Judy Wheatman said. “It was implemented about six years ago. A former student said, ‘You know, we are nominated by staff. How about if the students nominate the staff?’ And then it just took off from there.”

Senior Iemaan Khiyani nominated her AP Calculus teacher, James Krzeminski, due to his willingness and patience in aiding her when she didn’t understand the classroom material.

“I nominated Mr. Krzemenski because he’s one of the most patient, kind and caring teachers who I’ve met,” Khiyani said. “He cares about his students. Since I don’t understand Calculus as much, he spends countless periods outside of class helping me. I really appreciated that, and I’m really grateful for it.”

Physical Education teacher Tony Konsewicz was nominated by junior Alvin Gutierrez, a student he had two years ago, finds the event to be enjoyable and humbling.

“It’s a nice surprise; it’s a nice treat. Recognition is humbling, especially from a student, who I received the nomination from. I  had him his freshman year, and now he’s a junior. It reinforces what you do every day.”

According to Wheatman, the event is crucial because it allows students to express their gratitude to teachers who have positively impacted them.

“[The breakfast is] very important,” Wheatman said. “It gives students an opportunity to nominate a staff member whether it’s faculty, security, support staff and a chance to voice their opinion about someone who’s made a difference in their life.”

To Konsewicz, being nominated and honored allows teachers to understand and recognize how even their smallest actions can impact students. Most importantly, it provides teachers with an idea of what they’re doing right within their classes.

“As a teacher, you’re always looking to see how you can improve as a teacher,” Konsewicz said. “Sometimes you question whether you’re getting through to your students, so when you get an opportunity like this when someone recognizes you for something small they recognize in class, you really get to see, when you reflect on your teaching, that sometimes it really is the small stuff that matters.

Along with Krzeminski and Konsewicz, the other staff members who were nominated include: