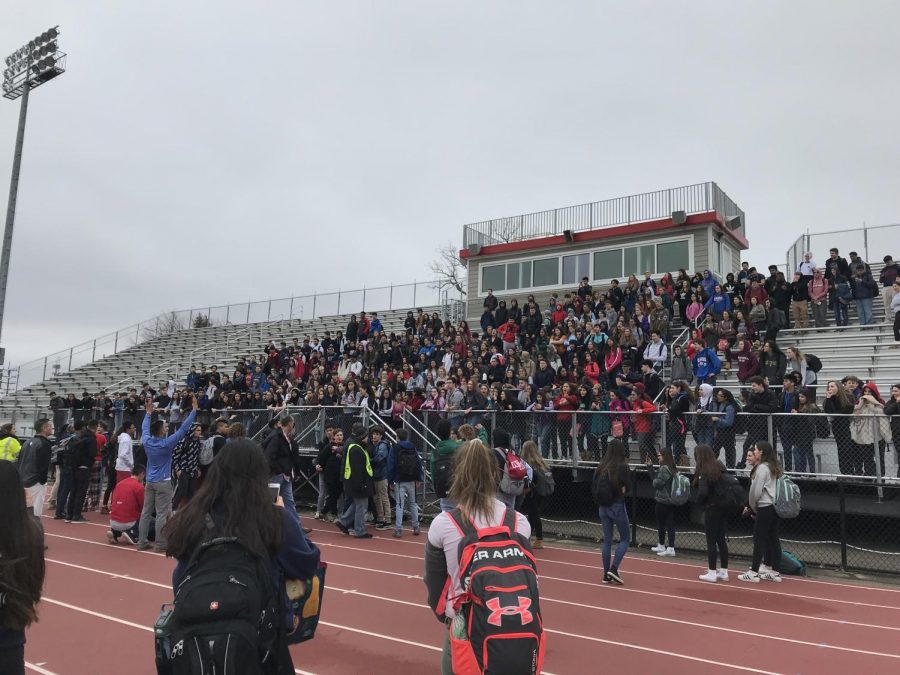 Students filed into the football stadium during a walkout against gun violence on Fri., Feb. 23.

Niles West students participated in a student-led walkout during fifth and sixth periods on Fri., Feb. 23 to raise awareness about the gun violence that is occurring in schools across the country and to advocate for gun reform.

The protest began during the tail end of fourth period, with around 20 students running through the hallways chanting, before exiting the school and circling the premises to the bus lot. They then converged on the football field; the gate to the fields was opened for students by school administrators after protesters were attempting to jump the fences in an effort to lead the group into the bleachers.

Once in the stadium, protest leaders, including senior Emmet Sundquist, sophomore Janaya Williams, junior Aryeal Tyler, and junior Angelique Guerrier, led the group in chants, including “we want peace” and “no more guns,” before protesters participated in a moment of silence in honor of the victims of gun violence.

Many of the organizers and protesters took part in the walkout because of the fear they feel coming to school due to the number of gun violence incidents that have occurred, most recently at Marjory Stoneman Douglas High School in Parkland, Florida.

“I feel like we need to get everyone together to understand: we need gun [regulations]. It’s getting ridiculous. Kids are losing their lives because of it. This school has no protection for us; we need to get it together,” Guerrier said. “I joined the protest because I care about everyone’s lives; I care about my own life. Hopefully, it will make people see that we’re scared for our own lives. Us. Children. We’re people, and we’re scared for our own lives to go to school where we get our education. It makes me worried about this, and this is why we’re here.”

Sundquist, who gave a speech to the assembled crowd, emphasized that students who participated needed to take the initiative themselves for the cause they believe in.

“I’m not here to act cool or give this publicity. I’m just here because I was fearful when I heard about the bomb threat at Niles North,” Sundquist said. “It’s up to us. It’s not me and my voice; I’m not the voice of everybody. Everybody has a choice to protest; it’s up to them.”

A majority of the estimated 200 students who took part in the protest did so as a response to the carnage that has arisen in our nation due to gun violence. Several had emotional reactions when they spoke about their reason for protesting.

“My reasoning for protesting is that there have been 18 school shootings this whole year. 18 school shootings. How many people do we have to have dead in order for the government to understand that there needs to be gun control, there needs to be metal detectors? What else do we have to do?”  senior Salvador Rodriguez said, with a tear running down his cheek. “Lawmakers don’t want to pass these laws. We need peace. All America is doing it, and I’m doing it, too, because I love America. I love everybody here. Nobody deserves to die at the hands of somebody’s mistakes.”

Inspired by the survivors of the Parkland shooting, who have gained attention in recent weeks for advocating for gun reform initiatives, students at West wanted to make their own voices heard.

“I wanted to be part of [the protest] because I think it’s important that we tell people what we want so that we can make a change in the future,” senior Sophia Cinquemani said. “Even though we’re just high schoolers, we are going to be a generation that’s living with the death caused by guns.”

A few of the participants felt that some of their fellow protesters were involved for the wrong reasons, namely to get out of class or appear on the news.

“It was just very poorly done, and it felt like a lot of people were participating in it just for the sake of being on camera or being on peoples’ Snapchat. It felt like they didn’t really support the cause because they were doing the opposite of what they were preaching,” junior Taral Talati said, referring to several students who broke out into a fight while other students were chanting “we want peace.” “I participated because I support the cause, and I think that there should be some type of protest against what happened, and we should be protesting for gun reform, but this was just poorly done, and people were protesting for the wrong reasons.”

The students who took the protest as a joke were criticized by more serious participants, who criticized their lack of empathy for an issue that affects students.

“It honestly really gets to me [that people are taking this protest so lightly]. This could have been us, and this could be people we know. The reason why some people are taking this as a joke is because we don’t know these people,” senior Eddie Hagopian said. “I see people here laughing, and they’re only using this as a way to ditch class. It’s just not right; it’s inhumane.”

West’s administrators were supportive of the students’ right to peacefully protest, which was something participants thoroughly appreciated.

“Gun laws need reform in this country. Niles West has been very supportive in letting us protest, which is very comforting,” junior Dylan Dinkha said.

Though he was supportive of the students’ efforts today, principal Jason Ness advocated for a better organized, community-wide effort against gun violence in the future.

“We all agree that we’re against gun violence. I think that’s something that students, teacher, and adults in the community stand behind, and this is just one form of that expression,” Ness said. “I look forward to the day when we organize as a school, with a very organized protest and an organized voice, and we can let everyone know, collectively, how we feel and where we stand on the issues. I would love to put together something that’s more organized, as in a school-sponsored protest so that we can hear all voices and understand why we all are out here. I’m always in support of civic protests and the betterment of society.”

A group of Niles West students will be organizing local protests for two separate scheduled national high school walkouts: Wed., March 14 and Fri., April 20. Along with these protests, the students affected by the Parkland, Florida shooting will also be organizing a March for Our Lives protest on Sat., March 24 in Washington, D.C..

Correction: An earlier version of this article included incorrect dates for the upcoming walkouts. The protests will be March 14 and April 20.