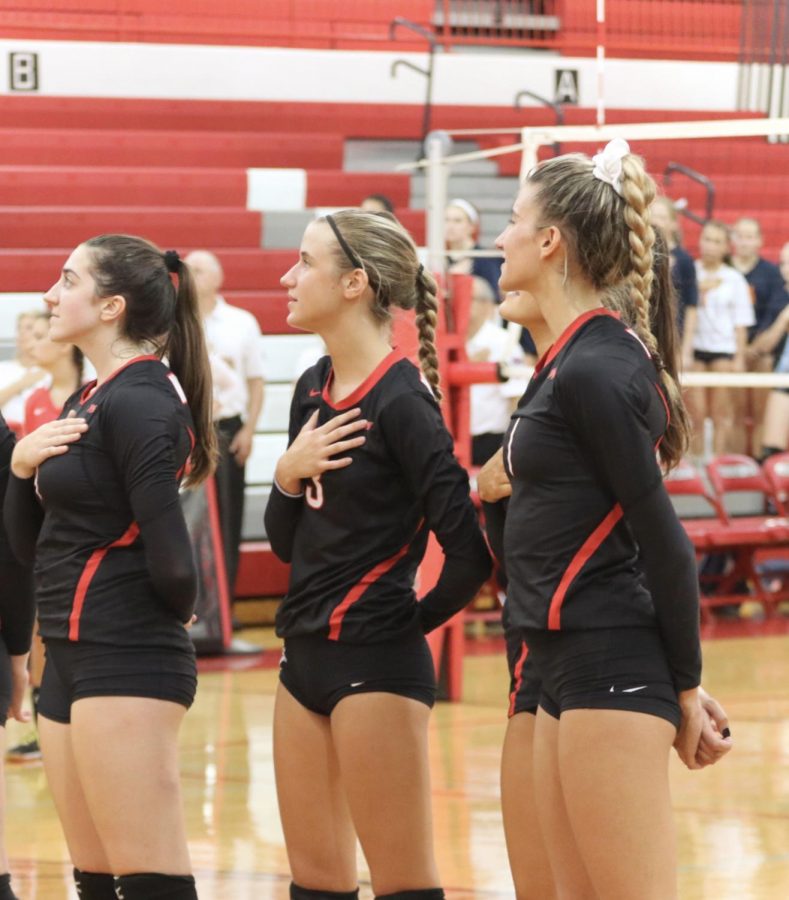 Freshman Gianna Pehar stands between her teammates during the national anthem.

As the crowd cheers, the girl’s varsity volleyball team enters the contest gym ready to perform their typical dance routine called “Sally Walker.” Amongst the team is freshman Gianna Pehar, and she follows the team as she gets into position to pump and bump before her game.

Varsity sports teams are normally hard to make when one is a junior, let alone a freshman. Pehar is one of the few freshmen at West to make a varsity team.

“Playing on a varsity team my freshmen year is definitely an accomplishment, but at the same time, it is a little scary because I’m playing with older girls who have had more experience,” Pehar said.

“My sister and I are best friends so it’s pretty cool being in the same school as her and my brother. Playing on a team with her is awesome too because we push each other to play at our best. It’s fun hyping each other up while playing the game we love together,” Pehar expressed.

Despite being a “newbie” on the team, Pehar is making an impact on the court and her fellow teammates.

“I love playing with Gianna and I think she is a very talented player who always brings so much energy to the court. She is always there to help, whether it is hyping people up or giving feedback on ways to improve, she is there for everyone.” junior Majla Spahija said.

Aside from volleyball, Pehar held similar thoughts to every incoming freshman when it came to the idea of “high school.”

“I was not excited to enter high school at all, it was a major change from middle school. Also, being on varsity as a freshman was a little scary at first because everyone is so much older and they all have more experience, but as I slowly got used to school I realized I shouldn’t have been worried in the first place,” she said.

Pehar’s volleyball dreams and career don’t just stop at high school. She hopes that her dedication and talent will get her far, and she hopefully looks forward to playing college volleyball in her near future.

“I want to commit for volleyball later on, which is currently my number one goal that I am working towards. Hopefully, all my hard work pays off and takes me somewhere in the future,” she said.