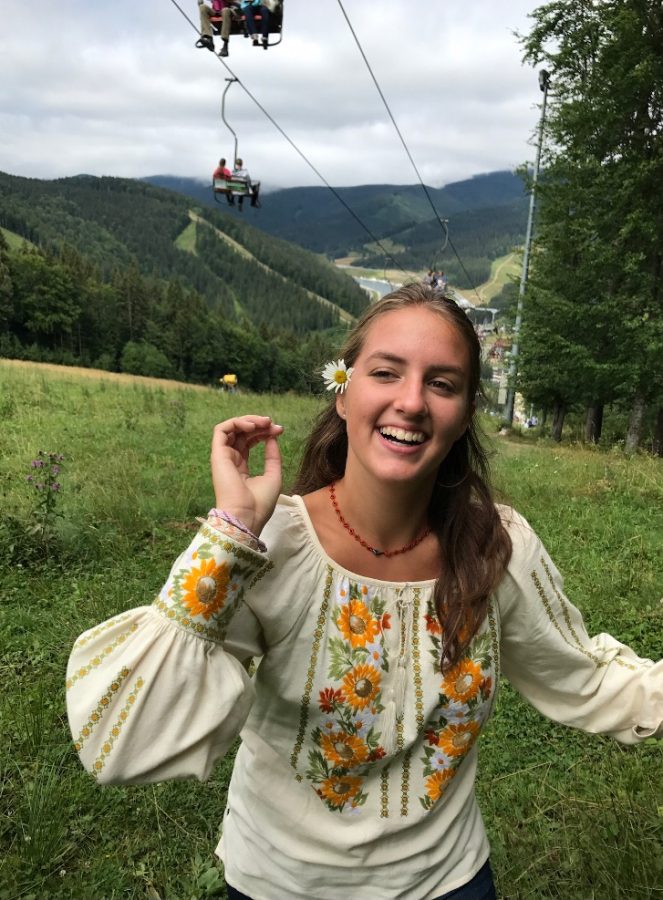 Sitting on the evergreen mountaintop, watching the freshly grown dandelions brush through the summer air, senior Nina Gillespie looks over her beautiful country of Ukraine. In these moments not only is she able to appreciate her roots originating in her ancestors’ city of Lviv, but also take pride in her cultural involvement back in the United States.

Gillespie has been involved in her Ukie community for almost her whole life. Growing up, Gillespie was taught at a young age to respectfully honor her culture as a Ukrainian American and to be as closely involved as she can. Through her hard work and admiration of her culture, she has made lifelong friends and some of her best memories.

“The Ukrainian community is made up of Ukrainians in America whose parents or grandparents moved to the U.S. back in the day. It’s basically a bunch of joined generations together who are involved in certain committees or groups,” Gillespie said.

In particular, Gillespie’s family is involved in the scouting group. Every Saturday they go to the Ukrainian village in Chicago where she is a leader for young Ukrainian girls who are between the ages of 8 and 10. Gillespie’s heavy involvement in this community expands across the continent.

Heavy Ukrainian communities can be seen in New York, New Jersey, Pennsylvania, and even Canada. Gillespie has made many friends from these areas and keeps in touch with them through the community.

The Ukrainian community holds multiple nationwide events throughout the year, including the Ukrainian debutante ball held for girls ages 17 and 18. In addition to this classy event, there are also more laid-back events. Among these events are ski trips in New York, a Memorial Day weekend volleyball tournament, and a chill beach week in Wildwood, New Jersey. Out of all of these, however, one of the biggest gatherings of the year takes place in Cleveland, Ohio at a Ukrainian camp during the summer where Gillespie is a counselor for girls between the ages of seven and eight.

“As a counselor you need to make costumes with them, write songs in Ukrainian around characters, and perform skits with the girls. It’s a three week stay away camp so it’s almost like we turn into their parents for those three weeks,” Gillespie said.

With these Ukrainian events, Gillespie travels a lot throughout the year.

“January and February I leave the state every weekend to go visit people. In the summer I’m gone the entire time because I’m in Ohio, I’m in New York, and I’m in New Jersey. These Ukie events aren’t really in the same place. They happen where most people can make it. Chicago is the furthest city out of all the other locations. I have to travel the farthest but it’s well worth it,” Gillespie said.

Beyond her international Ukrainian society, Gillespie is a well rounded high school student at Niles West where she plays on the varsity soccer team and is involved in West’s speech team.

“It’s a privilege to have such a motivated, passionate student in my early bird AP Environmental Science class,” Susan Schram said.

Even her friends in “American school,” as she likes to call it, are proud of Gillespie’s accomplishments in her community.

“I think the Ukie community leads to a lot of really awesome opportunities for Nina because she has really strong friendships with the other Ukrainians and is always traveling to attend Ukrainian events. I wish that I could be a part of a cultural community like hers because it’s like she has another family outside of her own,” senior Katrina Grunst said.

Gillespie hopes to inspire young Ukrainian girls to soak up all the opportunities that the community has to offer.

“I want these girls to realize that the friends that you make in the Ukrainian society will always be there for you, and the memories that you make at these events and camps will be with you forever,” Gillespie said.