Brian Pryzby: Climbing Up The Ranks 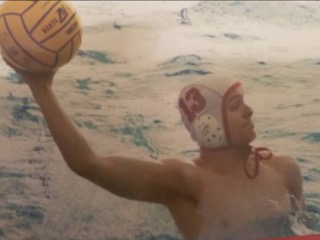 Junior Brian Pryzby immerses himself in the water polo game.

The high school experience can be overwhelming to many of us, but junior Brian Pryzby has undertaken plenty of challenges unfazed.

Pryzby has always been committed to athletics, but since high school, he’s honed in on water polo. Last year, Pryzby was captain of the J.V. water polo team, leading the team through a very successful season. Due to his commitment, he was also given the opportunity to play in varsity games, a rarity for a sophomore.

“He’s a great teammate. He supports us and comes to practice whenever he can, despite having a packed schedule,” junior and fellow teammate Jimmy Berg said.

“[Playing for the varsity team] allowed me to see the true aggression and intensity that water polo entails, and it gave me an advantage when I went back to JV competition,” Pryzby said.

On the J.V. team last season, Pryzby was one of the most accurate shooters, as he was the squad’s designated penalty shooter. As much as he enjoyed the J.V. experience, he was glad to be placed on varsity this year and sees some marked differences between the two squads.

“The people on varsity are a lot more devoted to improving themselves, and you need to be in a lot better shape to keep up with the competition,” Pryzby said.

Pryzby also endures a different kind of practice daily, outside the pool hallway: band practice. He’s first chair clarinetist in the Symphonic Wind Ensemble, the most advanced group the band program offers. Beyond clarinet, he also plays piano in the school’s jazz band, reflecting his commitment to music.

“As first chair clarinet, he does hold many very important roles in the pieces we play. He’s the one that everyone tunes to. He’s a fantastic player overall as well, and he leads by example,” junior Araf Billah said.

As a sophomore, Pryzby’s skill was recognized at bands across the country. As a sophomore, he was first chair clarinetist at the Ball State honor band. The band is a unique experience for high school students across Indiana and the Chicago suburbs, as it allows them to collaborate and learn from their peers as well as working with a distinguished conductor.

“[The Ball State honor band] rewards committed students with a great musical experience that was important to me,” Pryzby said.

This year, Pryzby earned a position in the ILMEA All-District 7 regional band and was awarded the fifth chair out of nearly two hundred auditioning students.

“ILMEA District 7 represents most of the Chicago suburbs north and west of the city. [It’s] arguably the most competitive district in the state, as students from schools from Lake County and northern Cook County participate,” Pryzby said.

This year Pryzby also made All-State Band, a rare accomplishment for many students, especially juniors.

With plenty of accomplishments to his name, Pryzby has enjoyed junior year so far as a chance to improve his academics as well. He enjoys taking challenging classes, having taken AP Calculus BC as a sophomore and always looking to better his GPA. As first semester comes to an end, Pryzby hopes to continue his involvement in these activities.