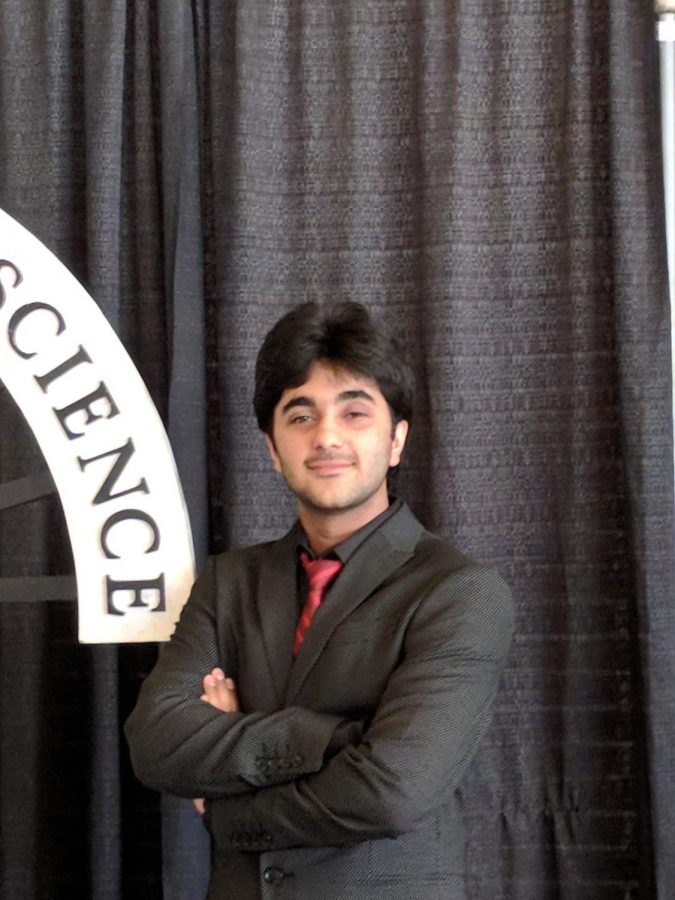 Well past 3:23 when the school day is over, a certain person can be seen scurrying from one science activity to another. This is, of course, all following a day crammed in with extra science and math classes. This scientifically studious individual is senior Muhammad Afzal, who has dedicated his four years of high school to learn as much as he possibly can about the sciences.

Afzal first got interested in the sciences when he was in middle school, through the after-school activity Science Olympiad, and has since blossomed into a lifelong passion for science.

“I first got interested in science in Culver School from the competition known as Science Olympiad. I was always a math and science attuned person, but I never really acted on my interests until I joined that club. It helped me decide what sort of fields I should focus on in high school in terms of science.”

Science Olympiad coach and STEM teacher Parin Patel has had Afzal as a student in varying capacities, knowing him since freshman year as a Science Olympiad student and later as a student of his own in the SIRS (Scientific Inquiry and Research) class. Patel believes Afzal has risen to the challenge and has worked extremely hard to become adept in the sciences.

“Muhammad has taken it upon himself to utilize the most difficult courses that are offered at Niles West. He’s always challenging himself academically, he always wants to learn the most and do the most and wants to be prepared as all the other student. He’s also is not satisfied with complacency,” Patel said. “But what makes Muhammad stand out the most in his classes is his willingness to help out other students. He not only completes his task, but he’s also helping other students to do it, and he’s a great advocate for all things science. So he’ll advertise the classes, the clubs, the activities, the different things he’s learned, and he’s really open to learning all those things.”

Junior Daniel Cudzich has observed Afzal’s hard work and dedication in his science classes, especially in regards to his project in SIRS.

“He’s got some of that engineering spirit in him since he’s in robotics with me and he’s been in robotics two years ago I think. He’s taken the highest science classes, leaping straight to Physics C as a junior. He’s currently taking AP Chemistry, and takings the SIRS class where he’s doing his own independent research project,” Cudzich said. “He’s going on this crazy optics focused physics-related research projects on solar panels and it’s absolutely outstanding to see just the crazy math and apparatus that he has to set up and how extensive his data and paper is. It’s clear he wants to investigate the world, down to the photon basically.”

Despite winning numerous awards for his hard work in the science field, Afzal believes his greatest accomplishment the friends he’s made along the way.

“I have had many achievements over the years, both quantitative and qualitative. I won Best In State for an Electronics project at the IJAS State science fair for two years now. I won the 3rd place in the Game On event in the Science Olympiad state competition. I received the Bausch and Lomb Award as a junior during Accolades,” Afzal said. “I also joined the WYSE competition in Junior Year, where I placed 3rd place for the Engineering Graphics Test a the Oakton Regional Competition. I consider the greatest achievements to be the many contacts and strong friendships I have made in the past few years. Although many of them have graduated, I still keep in contact with the graduated alumni and meet up with them.”

Where does Afzal see himself in the future for science? Naturally, he wants to get a Ph.D. in order to best help others.

“In the future, my goal is to inevitably help people. Science can be incorporated in many ways to help people. A person can become a doctor or an engineer,” Afzal said. “I plan to head into radiological studies that deal with nuclear fusion and nuclear medicine. I believe that nuclear energy is the answer to the energy crisis, so I will try my best to include it in daily use in the future. Eventually, I would also like to obtain a Ph.D. so that I may teach young students how science works and its potential.”

With a future as bright as Sirius A, Afzal will undoubtedly shine as one of Niles West’s best contributions to science.