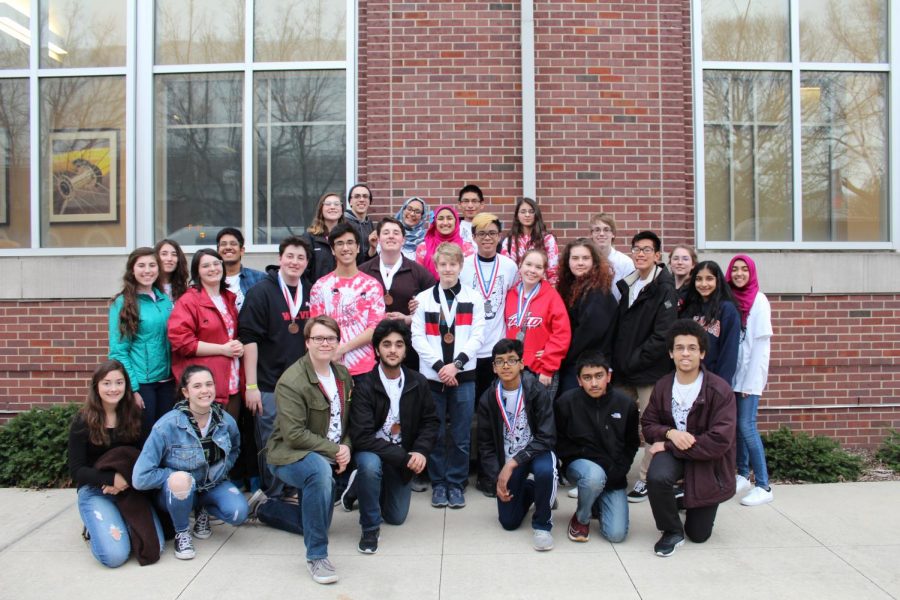 The Niles West Science Olympiad team poses for a group picture at the 2018 state tournament.

With the Science Olympiad season rapidly approaching its end, the team is working on improving their performance for the final competitions of the season. Their goals are high but achievable; they hope to qualify the team for the state competition down at the University of Illinois at Urbana-Champaign.

There are three teams that West will have to compete against in order to move forward.

“We also need to work very hard to make it to the State competition in April,” club sponsor Michael Boll said. “There are only three teams from our Regional that will make it to State and we have Glenbrook South, Loyola, and Niles North all competing with us for one of those spots.”

Senior Hana Frisch is getting ready for the last competitions of the season.

“We’re currently just getting started on building some of the events,” said Frisch. “However, one of my main priorities right now is getting our protein model perfected in hopes of medalling at state.”

Most recently, the team competed at the University of Chicago at one of the hardest invitationals of the year.

“So far the University of Chicago Invitational has been the best.  It was in an amazing location, and we had our home base in one of the physics buildings,” Boll said. “There were posters about all of the U of C contributions to things like the Large Hadron Collider, and the world’s first sustained nuclear chain reaction.  The competition was fierce and we did not win a lot of medals, but the awards ceremony was very entertaining, with several groups from the university performing for us.  We saw an improv comedy group, a hip-hop dance group, and an acrobatic group.”
Senior Muhammad Afzal reflects on the struggles and successes of the season fondly, proud of what the team can achieve.
“This season of Science Olympiad has been a bit rough. We lost many seniors last year, and we haven’t had enough freshman to join this year to compensate; however, the team this year is more focused on getting to state and even nationals,” Afzal said. “Our study events are getting better per competition, I can speak for that since my study events, Designer Genes, Protein Modeling, and Chemistry Lab are doing better each practice that comes.”

Looking back, the season so far has also been going well. The team has had several medalists at multiple competitions, but most importantly the team has been giving the freshman and sophomores important foundations in both general science and for succeeding in future years of Science Olympiad.

“The goal for the year is to make sure the students learn science!  We also hope to help our Freshman and Sophomore students improve in their ability to compete in Science Olympiad so that we can build the team for the future,” Boll said.

With the most stressful parts of the season coming up, 3420 and the surrounding areas are busy with talk of building, engineering, and science. The team is always looking for new members, so if you are interested in joining next year, stop by and take a look at the team functioning at its prime.

“Regarding our building events, we have been going strong so far. Most of our building events are underway, although some are harder than others. You might even see some of our members working in the science hallway on the second floor after school. Our next competition is Feb 23 at Loyola [Academy] so we will get everything done by then,” Afzal said. “To all interested in science, discovering new things, and hanging out with friends, join Science Olympiad”
Delete Image
Align Left
Align Center
Align Right
Align Left
Align Center
Delete Heading