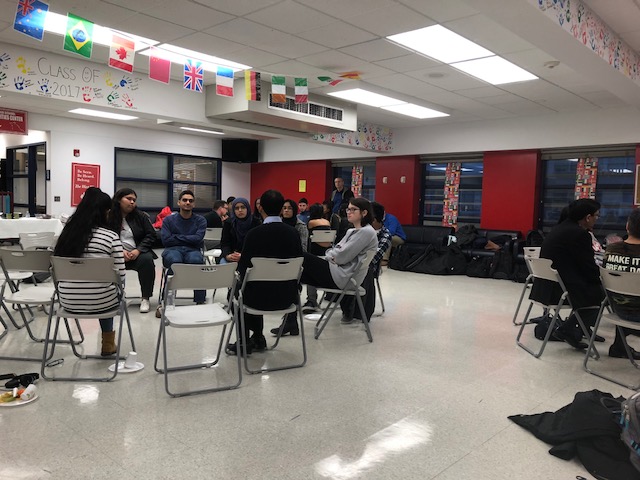 Students gathering at the Interfaith event in order to expand their views on religion.

Niles West is known to be one of the most diverse high schools in the country, and the interracial event called Interfaith that took place in the student commons perfectly reflected that. With so many diverse cultures come many different religions and backgrounds. The Interfaith event hosted by H2O (Humble 2 One) club in collaboration with MSA (Muslim Student Association) was a learning experience for students to come together and gain more knowledge about religions that they may not know about.

“It’s important to have an interfaith event at Niles West because our diversity at Niles West is a beautiful thing, but it can also cause problems, conflict and it can lead to prejudice and discrimination if we don’t understand each other. When we have events like this, it allows us to see how many things we share in common as well as it helps us understand our differences,” sponsor of the MSA club and teacher Daniel Kosiba said.

The event was centered around guest speakers who came to talk about their religions and comparisons to others to reflect on the similarities and differences. There was a guest speaker for Jainism, Christianity, Judaism, Buddhism, and Islam. Each guest spoke first gave a short summary of their religion and then compared them to the other religions being presented.

“I’m excited about learning about the other religions because I really only have knowledge on one, Islam, and I barely know about Christianity and it’s talked about a lot in books I’ve read for AP lit this year,” MSA member and senior Ramisha Haque said.

After the five speakers individually spoke about the similarities and differences between religions, everyone took a short food break. The sponsors then split everyone into five groups where each speaker would be stationed. Every few minutes, each speaker would switch groups so that students could ask questions pertaining to the speaker’s religion in a more intimate setting.

“It was really interesting to learn about all the different religions and have time to ask questions to each person,” senior Rosa Gawin said.

Overall the event produced an understanding of one another and united everyone through the similarities and differences of their faith, something that is very personal to each individual.

“I really hope students take away most of the teachings and preachings of these major faiths which are advocating the same things: empathy, justice, kindness, generosity, and charity,” Kosiba said.