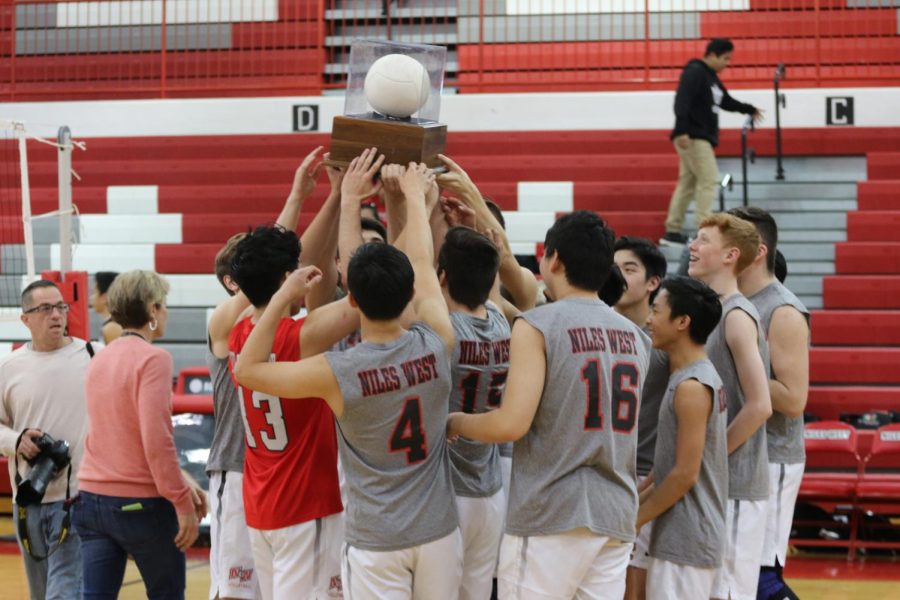 The boys gathering around their regional championship trophy from last year.

Bump, set, spike. The familiar sound of the ball slamming on the floor after a kill will soon fill the contest gym at Niles West. Following their successful season last year, the varsity boys volleyball team is gearing up for their 2019 season. With seven returning seniors leading the team, this year is looking to be the best one yet.

Senior Evan Han is excited about his last season and believes the team shows a lot of promise.

“I’m really excited to basically have the same group of guys from last year with the addition of younger players, including my brother, Ryan. We went on a hot streak last year and went undefeated for the first five games or so and if we can repeat that with the same chemistry then I think we’ll be a top team in the conference,” Han said.

Han is a returning player for the team and believes they are fully capable of bringing home a regional trophy.

“I think our team definitely is capable of a repeat,” Han said. “Usually, the first regional game isn’t a tough challenge. We obviously don’t want to feel the same way as we did last year — losing to Maine South by two in the third set. It hurt a lot of us to lose like that, so we definitely want that regional title and I know all of us want to bring some hardware for our program because it hasn’t been done in a while.”

Being a role model for his younger teammates is one of Han’s personal goals for this upcoming season.

“Goals for myself include taking the role of a leader for our team and guiding the underclassmen. Nikola, one of my good friends and captain of last year set high standards for everyone and I plan on keeping those standards and having everyone compete for roles,” Han said. “I also want to become a better setter so I can set and play with my brother for senior night. Throughout the season, I want to work on consistency so I can pass as a Libero or even play as a pin hitter.”

“For this season, I’m excited to play again with the same group of guys,” Huynh said. “Last year, we fell short against Maine South but it was a very close game and I think the team has a lot of potential to win regionals this year. Personally, I want to be active on the court and hustle for every play.”

With the season right around the corner, the boys are hard at work preparing for their Regional title goal.

“We have a solid core of players returning from last year so it’ll be interesting to see what we can accomplish coming off of a pretty good season last year,” junior Kyle Moy said. “I think a regional title is probably our biggest goal this season and last year we came so close, so I definitely think there’s a chance this year.”

The boys will be taking on Notre Dame on Tues., March 19, at home to kick off their season.