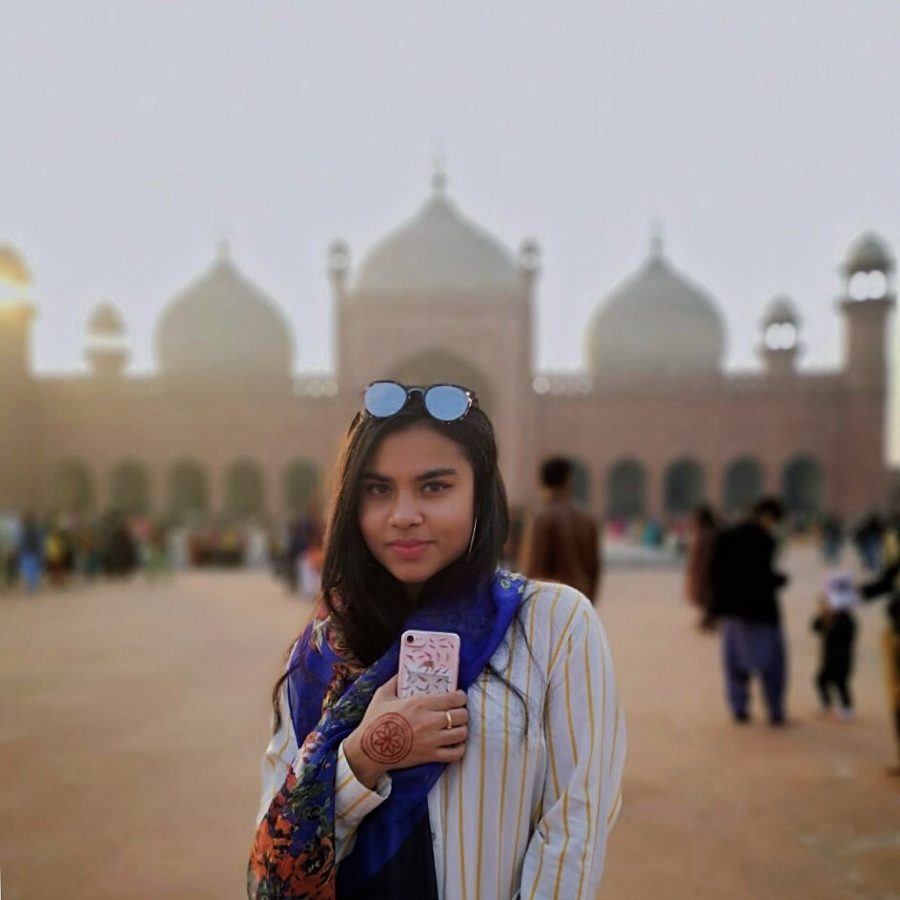 Senior Noormah Ayub in front of the Badshahi Mosque during her trip back home to Pakistan last December.

With an overwhelming sense of excitement coursing through her veins, 11-year-old Noormah Ayub boarded the plane from Islamabad, Pakistan to Chicago, Illinois. Sitting in between her father and brother, she fidgeted in anticipation throughout the 18 hour-long flight, knowing that the moment she stepped foot off the plane, she would be starting a whole new life. Despite the harsh rain and windy September weather, Ayub walked out of the O’Hare Airport with a large smile and a new sense of hope.

Living in a busy and vibrant city of Sialkot, it was easy for a young girl like Ayub to get lost in all the chaos. Always being surrounded by an abundance of family and friends, her voice often went unheard as she grew up. Although Chicago was just as lively — if even more than her hometown in Pakistan. Ayub forced herself to work twice as hard to make sure her voice was heard — this time in a new language.

Only speaking Urdu and Punjabi, she spent her first couple of years in America at a small elementary school in Cicero, Illinois. Spending hours at the library every day after school, Ayub eventually taught herself English so that she wouldn’t get left behind in school. Unfortunately, learning the language was the least of her worries as she faced cruel discrimination and harassment for her religion. Still, despite harsh words against her culture, nothing could hinder Ayub’s pride in wearing Pakistani clothing, jewelry, and accessories whenever she pleased.

“I’ve always loved expressing myself culturally, but in Pakistan the teenage girls at my school had the mindset that if you weren’t wearing jeans and t-shirts, you weren’t modern enough — which is something I hate or feel sad about for my people, that they aren’t proud of our culture,” Ayub said.

Although Ayub’s cultural pride never wavered, her journey with self-confidence in the U.S. was nowhere near easy. After finishing middle school in Cicero, her hard work paid off and she was accepted into the more diverse and academically challenging high school, Lane Tech. Despite the one-to-two-hour commute by train and bus every morning and afternoon, Ayub fell in love with the school and began to come out of her shell in a more accepting environment.

Eventually, the commute became too tough on the young student and come her sophomore year, she transferred to Morton East — the local high school in Cicero. Ayub, unfortunately, noticed that not much had changed with the cultural environment at school, but she was yet again determined to work hard until she got a better opportunity — which luckily came around her junior year. After jumping back between schools districts, Ayub’s parents finally settled on D219 for her junior and senior year.

Walking into a new school, new district, and a new environment was nothing short of daunting for Ayub. She was already familiar with the whole process as a transfer student, but each school she had attended had been so vastly different. For the first time ever, she was stepping into a school that was so incredibly diverse where she saw people of her own culture in her classes.

Despite being the ‘newbie’ she found it easy to engulf herself in more activities such as Cross Country, Track and Field, MSA (Muslim Students Association), Indo-Pak, Go Green Club, and NHS (National Honors Society). In her classes and activities at West, she was able to more comfortable express herself culturally, never fearing judgmental eyes and discouraging words.

Ayub also began to slowly, but surely, make her voice more heard as she developed relationships with new friends of both the same and other, culture. Best friend and long distance running teammate, senior Zainab Siddiqui, took note of this as she got to know Ayub.

“You can see certain accessories or pieces of clothing that are more on the Indian side. Between us, since we’re both brown, we talk about foods of our culture and certain experiences that only we would have and understand and you could see that Noormah usually has a lot to share about these things, ” Siddiqui said.

Whether it be by customizing her own clothes from the material down to the length or wearing a tikka on her head or henna on her hand, Ayub never allowed her constantly-changing environment to defer her cultural pride. From the moment she stepped foot off the plane from Pakistan, she promised herself to never lose sight of her cultural values.

Former teacher and mentor, fine arts teacher Edward Warble, is one of the many people who had the opportunity to watch her flourish as a student and individual.