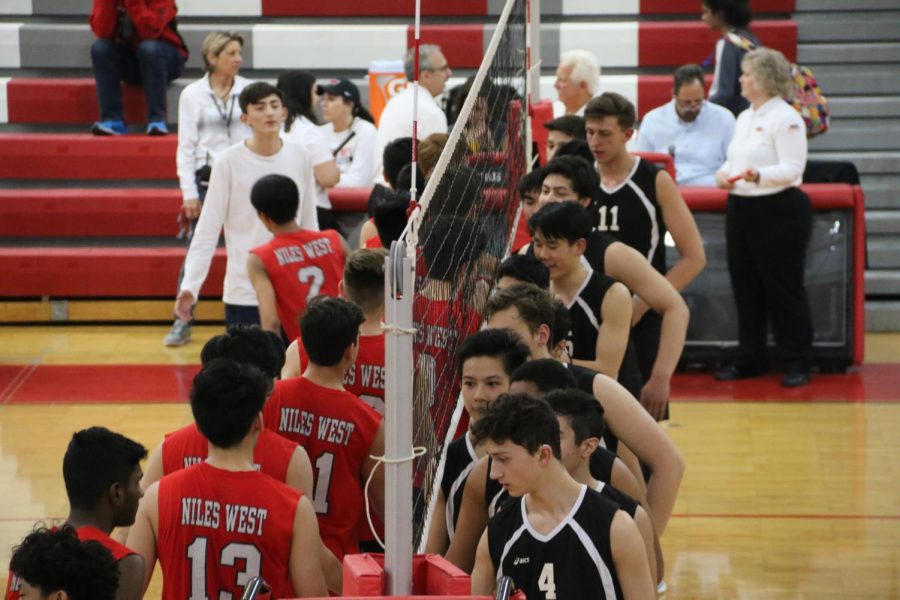 Before the Niles West Varsity Volleyball team opposed Maine South on Wed., April 24, their record was 18-5. The game resulted in a loss for the Wolves, but the team’s actions prior to the match resulted in two more losses — delivered in the form of a two-game suspension.

After reviewing security footage from Maine South with head coach Andrew Roche, athletic director Dana Krilich issued the suspension, which remained in effect until Wed., May 1. Accordingly, the athletic schedule was updated to reflect the cancellations–against Glenbrook South (away) and Evanston (home).

At Glenbrook South, the varsity team attended to support the J.V. Wolves and the Freshman B team. When the Wolves opposed Evanston at home, the Freshman A and B teams took the main court, while the J.V. team played the Wildkits in the field house.

When the suspension expired, the boys immediately returned to practice. Next up on the schedule is the Glenbrook North invitational tournament May 3-4.

Heading into the second stretch of the season, the varsity record sits at 18-7. Forfeiting two conference opponents back-to-back jeopardizes their chances of being conference champions. But by restarting and refocusing, the boys hope to finish top 3, which will put them in a good position for the regional seeding.