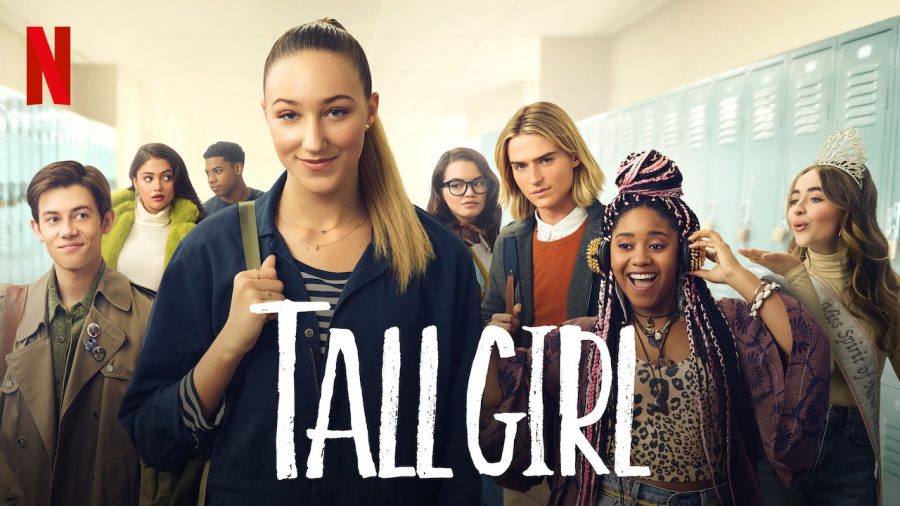 Whether you’ve seen the TikToks about it, or you’ve seen the name floating around on Netflix, it’s inevitable that you’ve heard of Tall Girl, the new Netflix original movie. The movie released on Sept. 13 and has become popular on social media.

The story follows Jodi, a high school junior that stands at a “shocking” six-foot-one, and her journey of accepting her height and insecurities while also finding a sense of belonging. Jodi, who usually only gets noticed for her height, becomes involved in a love triangle.

Throughout the movie, Jodi comments on her height, thinking of herself as a giant. In fact, it’s not just Jodi that thinks that but her entire school seems to think she’s ridiculously tall. Based on the movie, viewers might happen to think that being six-foot-one is insanely tall. There are very few guys in the halls that are taller than Jodi, let alone any girls. Besides the lack of moderately tall students, there must be normal-sized furniture missing from high school too. In almost every scene, Jodi towered over whatever furniture was in school. In the library, she was taller than the bookshelves, as well as everyone else in the library. When she was standing at her locker, Jodi stood almost as tall as the top row, while no one else in the hallway came even close. Come on Netflix, are there really no guys taller than six feet anymore?

I wasn’t the only one to think that the movie exaggerated Jodi’s height as sophomore Olivia Vasilj had much to comment on it too.

“In the movie, everyone was the same height, and not just at West but in the real world too, there’s a whole variety of heights. Lena is six-foot-tall and honestly, it’s not that big of a deal. There are people way taller than Lena and Jodi,” Vasilj said, referring to her friend, junior Magdalena Soldo.

There have also been numerous TikToks made involving one of the earlier scenes, where Jodi, played by Ava Michelle, claims that she has a rough life because she wears men’s size 13 Nikes. The trend is to film that clip and then follow up with why your life is actually rough. Some of the most famous ones are high schoolers having cancer, hard family lives or mental health issues.

Besides the excessive emphasis on Jodi’s six-foot-one stature, some of the jokes seemed a little forced throughout the movie. I’m not surprised considering this is a Netflix rom-com aimed for the same crowd that loved The Kissing Booth and To All the Boys I’ve Loved Before. The plot seemed very similar to other teenage rom-coms, but can you really complain? The moments that were supposed to be major turning points became even more comedic due to how predictable and dramatic they were.

Now, this review isn’t just a list of negative things about Tall Girl. There were some things that the directors did a nice job of, such as the framing of the shots, especially in the opening scenes. They also did a better job at portraying what American high schoolers actually wear to school, as well as casting actresses like Ava Michelle, who’s only 17, and not a 24-year-old portraying the role of a 16-year-old. The movie, while still a generally predictable movie, had some plot twists that I wasn’t expecting but wish to not spoil in this review.

Even though cute little teenage rom-coms aren’t my favorite movies, Tall Girl wasn’t the worst movie that I’ve seen. On a scale from one to ten, I’d rate Tall Girl a five. The overall plot could’ve brought so much more to the movie than it did and most of the plot wasn’t too realistic or relatable. The cringy moments and jokes caused second-hand embarrassment to all viewers.