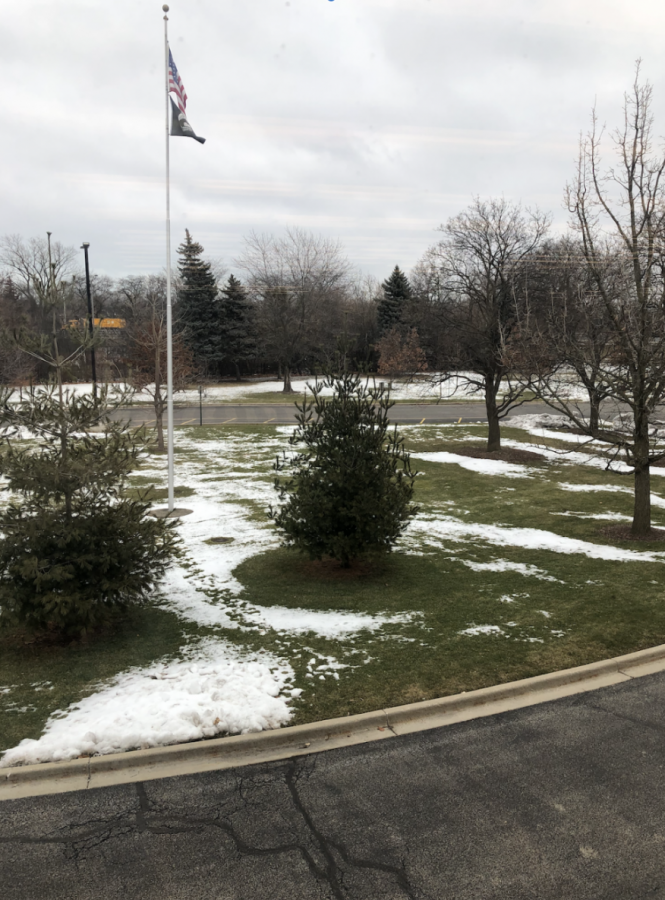 Police entered the school through the cul-de-sac on the east side of campusl.

By Sarah Waters and Gloria Kosir

Skokie Police officers bearing rifles entered Niles West on Nov. 20 after a 911 call mistakenly reported an active shooter on the premises. The Niles West News obtained the police report via the Freedom of Information Act after the Skokie Police Department’s investigation concluded. The report confirms the timeline and details of the incident.

The 911 caller reportedly misinterpreted a text from a student regarding the YOLO threat on Mon., Nov. 18, which detailed an attack on the school planned for Thurs., Nov. 21. Two days later, on Wed. Nov. 20, the student texted a relative about the threat, who then called 911 believing “the incident was happening at that very moment,” according to the report. No active shooter was present.

At 2:16 p.m., officers began entering the school through the cul-de-sac on the east side of campus.  A police sergeant was already present at Niles West as a precautionary security detail.

“I was teaching a lesson on sentence structure when students started looking out the window and asking why there were police cars coming. I tried to carry on with the lesson, but students were already at the window, saying that there were police cars pulling up,” English teacher Michele Lewis said. “It got to the point where I couldn’t carry on with the lesson. We then saw police get out of their cars and run toward the entrance by the nurse’s office, carrying rifles.”

According to principal Dr. Karen Ritter, school administration did not have any information about the 911 call before the officers arrived. The first officer arrived at the school one minute and 33 seconds after the call was received and officers were dispatched, according to the police report.

“I remember leaving my office and going to the hallway, where I saw several police officers talking to Michael Pechter, our director of security,” Ritter said. “The officers said they were responding to a 911 call. At that point, I didn’t know what the 911 call was about. I didn’t want people to get scared by seeing police here, so we spoke to the officers in the counseling office.”

“We didn’t know the police were coming until the police were here. Once the police were on school grounds, we talked to them to assess our next steps. That happened within a matter of minutes, as the safety of our students is paramount,” assistant principal for operations Steve Parnther said. “The police informed us what they had heard from their end. We ran the hallways and had a conversation with the police, where we ultimately determined that the school was safe.”

Parnther made an all-clear announcement at 2:34 p.m., 18 minutes after the officers first arrived and after administration’s meeting with police concluded. An email with the same message followed the announcement.

“We decided to make an announcement so that people understood that it was a response to a 911 call, and that it was not an emergency, just to put everyone at ease,” Ritter said.

Like Lewis’s class, many students and teachers who saw the police enter were alarmed by the officers’ presence. English teacher Paul Bellwoar’s eighth period class witnessed the police’s arrival and awaited an announcement about the incident.

“I could see through to that cul-de-sac. My classroom looks right over it. I caught that there were a couple of squad cars inbound, and that there were multiple parked there already. When my eighth period class saw me check it out, they immediately turned and asked what was going on,” Bellwoar said. “I fell back on protocol, and said that we would be notified if we needed to be. Of course, we were all waiting for a notification.”

Lewis’s class was especially frightened until the all-clear announcement was made.

“We were scared. I made sure that the door was locked. Some students were getting down onto the floor. I was trying to maintain some kind of normalcy in the classroom,” Lewis said. “None of the classrooms around me were aware of what was going on.”

Social studies teacher Lauren Flahive was concerned that neither she nor her students were aware of the police presence in the school until after the announcement was made.

“I didn’t know that police entered the building until after the fact when the announcement was made over the PA. At that point, I was wondering why a soft lockdown, at the very least, hadn’t been issued by administration,” Flahive said. “I believe this would have alleviated some of the panic that I know was experienced by teachers and students who witnessed the armed police enter the building as opposed to having no idea what was going on.”

Lewis and her class, who witnessed the incident, also waited for clarification.

“Before the announcement [at the end of 8th period], I felt like we needed to hear some kind of communication. My students were frightened,” Lewis said. “Our blinds were open, and we were facing that area, afraid of what we saw.”

“I wasn’t in a classroom that saw the incident, but after it had occurred, I was confused and shocked,” senior Adrian Recinto said. “I felt that an explanation of the timeline was necessary. I think we were all confused as to what had really happened.”

“I personally didn’t see what was going on, though I heard from friends who were in classrooms overlooking where the police entered,” senior Brian Pryzby said. “It sounded terrifying to see police storming your school while carrying heavy duty guns. I was freaked out when I heard the announcement, as tensions had been high all day. I felt like we didn’t have all the information.”

Some students were alarmed that the threat situation escalated in three days.

“I found it really strange that things unfolded to [the point] where cops had to run into the school with their guns drawn,” senior Leander Chappotin said. “Especially since the school hadn’t had an actual notification about their arrival.”

The police report also indicated that two juveniles were involved in the original threat. As previously reported, one juvenile will not return to Niles West. School officials were unable to comment on the enrollment status of the other involved students due to FERPA, a privacy law that protects minors’ information from being publicly disclosed. According to the police report, the threat was categorized as disorderly conduct.

Extra security measures were put in place following the incident, including mandatory I.D. checks at building entrances and added security after school. According to Parnther, I.D. checks were already policy at Niles North.

Intercom maintenance is ongoing, and a Dec. 9 email from Parnther indicated that speakers were added and the volume was increased. A Threat Assessment Team was also assembled to handle similar incidents in the future.

In an emailed statement, Niles Township Federation of Teachers and Support Staff president and math teacher Tim Miller said, “Our Union building leaders discussed the situation with Dr. Ritter, and teachers and support staff on the Threat Assessment Team will be looking for ways to continue to increase the safety and security for all.”