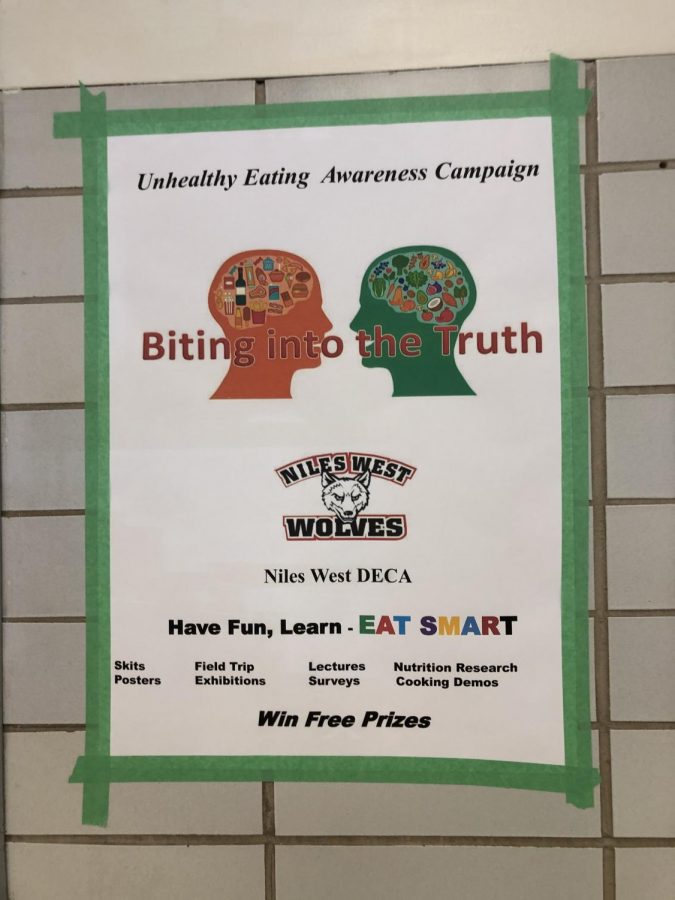 You may have noticed the numerous “Eat Healthy” or “Eat Smart” posters that have been hanging in the school for the past couple of weeks. The posters are only one of the ways juniors Henry Gussis and Richard Chen, are promoting the benefits of healthy eating with their new “Niles West Eat Smart” campaign, which is dedicated towards not only informing the Niles West community of how they should be eating healthy, but why they should be eating healthy.

One of the way the young DECA stars have attempted to reach this goal is by collaborating with Niles West’s own Quest Foods to create healthier options on the menu for students to both enjoy and benefit from.

The group has also received praise from prominent political figures in the community, such as congress member Jan Schakowsky.

“I commend the students of the Niles West High School for their effort to encourage and motivate their peers to eat healthy,” Schakowsky stated in a letter to the campaign.

One way that the campaign members have attempted to enhance their understanding on food and healthy eating is with a field trip taken to UIC on Mon., Dec. 2.

The field trip included presentations from Angela Odoms-Young, associate professor in the Department of Kinesiology and Nutrition at UIC. In her presentation, Young expanded on the relationships between structural and social adversity and food insecurity in families with children.

The presentation addressed the topics of different types of households (how many parents in the household, children, parents salary, etc) and how based on the area they live in, they may either be set up for not only a lack of food security in terms of having food to eat in general, but a lack of variety in the food they eat.

She also addressed the topic of unhealthy eating and what it does to you, and stressed the importance of maintaining a health style.

Specific foods serve specific functions in your body in order to support the heart, and lack of maintaining a healthy lifestyle leads to a failure in this system. In fact, heart disease is the biggest killer in America, killing 17.9 million annually.

Young begins her presentation by addressing that you never know who around you may be suffering from food insecurity.

“Food insecurity is definitely more of a social issue…a social justice issue. So I think it’s important because we all assume that everybody is also like us, and there may be neighbors and friends that are experiencing food insecurity and you might not even be aware of it,” Young said.

Young goes on to explain how the stigma associated with certain areas over the globe creates a pattern of unhealthy eating.

For example, while Niles has a multitude of grocery store chains that offer a variety of foods which includes fruits, vegetables, grains, proteins, and the other key categories required for a healthy diet, neighborhoods such as those in the South Side of Chicago may only have a small corner store and fast food chains to provide community members with food. This comes from an ongoing prototype that is associated with the South Side, something that areas such as Niles or Skokie don’t have to worry about.

Luckily, Young believes there are several different ways to defeat or at least slow down food insecurity.

“The first line of defense is the charitable food systems. If you have pantries close to your school, how can you support them? And one of the big things when it comes to food insecurity is that we used to think that we just need to give people canned goods or boxes, and we don’t care about the helpfulness of those foods. People that may have to depend on those sources also are faced with chronic conditions, we want to make sure they have access to healthy foods,” Young said.

As a way to combat this, Young suggest healthy food drives at school, or donations of fruits and vegetables to a nearby pantry. Community gardens are a perfect example of ways to give those with food insecurity access to healthy food.

Young also talks about how many colleges in America are starting to host mini food drives within their campuses with the left over foods cooked in the dining halls. This is a great way to give college students who are away from home and may not be able to support themselves a chance to eat right.

Overall, the presentation really shed light on what it’s like to be food insecure, where this insecurity comes from, how to combat it, and the stigma associated with it.

Following the presentation we were given a chance to tour the food lab at the university, where one of the nutrition classes were preparing foods with recipes they created for their final project.

This part of the field trip was really awesome, because the items that students were creating, were not just regular pizzas or yogurt items, they were pizzas or yogurt with a twist to them.

For example, one group created a pizza designed with all of the nutrients and vitamins vital for a pregnant woman to receive. Another group created a coconut yogurt filled with probiotics.

For more information on the Eat Smart Campaign check out their Instagram: @nw_eat_smart.