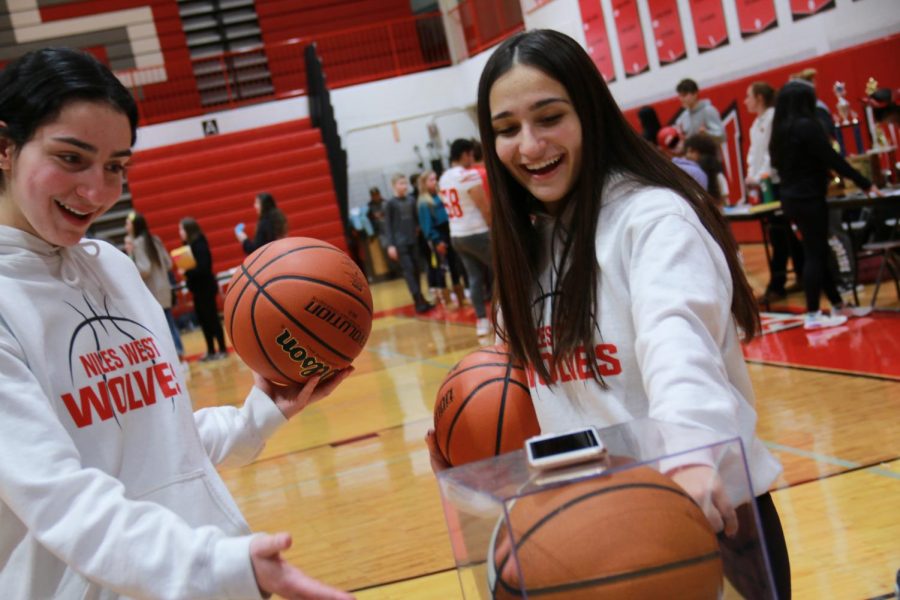 Junior Sami Lipsit and Albiona Ahmeti showing off their trophies as they recruit new basketball players.

Eighth graders enrolled at feeder schools and their families learned about extracurricular opportunities at Niles West on Thursday evening as part of the annual Curriculum and Activities Night. Current club leaders and participants showcased their activities to the incoming freshmen, who had the opportunity to sign up for more information about clubs that interested them.

Athletic teams had informational tables in the contest gym, where students who were interested in playing a sport could sign up for further information. Interest clubs, language and culture clubs, and competitive academic teams were organized in the field house.

For many students, the event was their first exposure to what extracurriculars Niles West has to offer. Some students are already set on the activities they wanted to pursue.

“I really liked the opening activities, when everyone got to say what school they were from,” incoming freshman Kaitlyn Gomez said. “I’m most interested in doing soccer and athletics in high school, as well as the Science Olympiad team, since I’m involved with it now at Parkview.”

Many current West students see the event as important to retaining and recruiting new members for their activities in the years to come. Since many clubs’ leadership positions graduate at the end of each year, the event is especially important for upperclassmen to recruit new members to shore up involvement in their clubs.

“Curriculum night is important because it educates incoming freshmen about clubs they can go into,” junior Shayna Maitino, who was promoting her club at the event, said. “It’s a nice taste of what the school is like. You’re not committing to anything yet, you’re just learning.”

“I think the night is important because it helps the incoming freshmen know what’s going on in our school,” senior Weronika Gradjura, the president of German Club, said. “It helps them get familiar with all the diverse clubs and activities we have here. It’s really important to help new students become involved in the Niles West community, and also have fun while making our school better.”

Students who were unable to attend the event are not at a disadvantage for joining clubs their freshman year. Students who are interested in joining a specific club should reach out to their counselors once they arrive at Niles West in the fall.