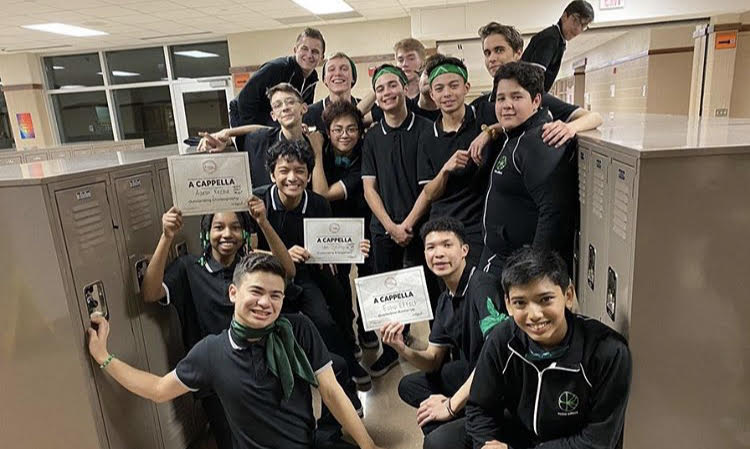 Echo Effect posing together after winning second place at their competition last weekend.

As winter sports start to wrap up their seasons and spring sports begin pre-season training, it’s important we remember all the other amazing extracurriculars that have been working hard and practicing year round. One of those extracurriculars is the three amazingly talented a capella groups here at Niles West: Echo Effect, Tonal Eclipse, and High Fidelity.

All three groups recently performed at their quarterfinal competitions. The first group to perform was Niles West’s all-girls a capella group, High Fidelity. High Fidelity performed on Saturday, Jan. 18., and walked into the competition as the first of the three groups to perform. There was definitely some pressure on them, but luckily, the girls seemed to respond well to the pressure and blew the crowd away, earning third place overall.

“Preparing for competition is extremely vigorous and time-consuming, but in the best ways. We spend hours after school running through our sets and perfecting things right up until the last couple of days before we perform,” High Fidelity member and junior Janay Moncrief said.

The girls had an especially impressive theme of women empowerment, singing iconic feminist classics such as “No Scrubs” and “Independent Woman.”

“We always get compliments from other groups/staff at ICHSA about how we embody confidence and Women Empowerment, and I think that’s really become our motto. It’s truly what HiFi is all about, and that’s my favorite part. We get to dominate in a world where the odds aren’t in our favor and to hear that we actually inspire other people justifies my cause for loving this group so much,” Moncrief said.

Congratulations to High Fidelity for getting third place overall in their quarterfinals competition, just one point away from tying second and advancing forward, but this most certainly isn’t the last you’ll see of the girls.

“For the rest of the year, I think our goal is always to keep improving and keep growing as a group. We’re going to keep working on our comp set and add some new songs as well,” High Fidelity member and junior Evan Arvizu said.

Niles West’s all-boys a capella group, Echo Effect performed a week later, on Fri. Jan. 24. Like High Fidelity, Echo Effect didn’t spare the audience an unforgettable set. The group performed smash hits such as “Grow As We Go” and “How Long.”

“I wasn’t able to perform with Echo the night of the performance, but I was in the audience to support them while they sang and backstage most of the rest of the performance, and just being backstage with them, I could sense the nervousness they felt. In the end, they were able to overcome it and perform the set even better than we practiced it,” junior and member of Echo Effect Ben Arvizu said.

Despite the nerves, the boys managed to put on a jaw-dropping show, earning second place and giving them a chance to move onto semifinals in Milwaukee in March.

The last of the three groups to perform was co-ed a capella group Tonal Eclipse. Tonal Eclipse performed the day after Echo Effect. One of the songs from their set was “Have Mercy,” with a solo from sophomore Sofia Joseph.

The song was especially special because the whole group really felt that they could connect with it on a personal level. Tonal Eclipse doesn’t know their place yet, as they’re still waiting on results along with feedback. Regardless of the groups placing, they’re proud of their performance and the time they spent together preparing definitely made it worth it.

“Preparing for the comp was stressful but really fun because creating an entire set out of music and choreography is so fun and it’s all student-led, so the pay off of finishing a set is huge,” Tonal Eclipse member and junior Naomi Greene.

There is no doubt that all three of the Niles West a capella groups could not have represented West any better than they have these last two weeks.