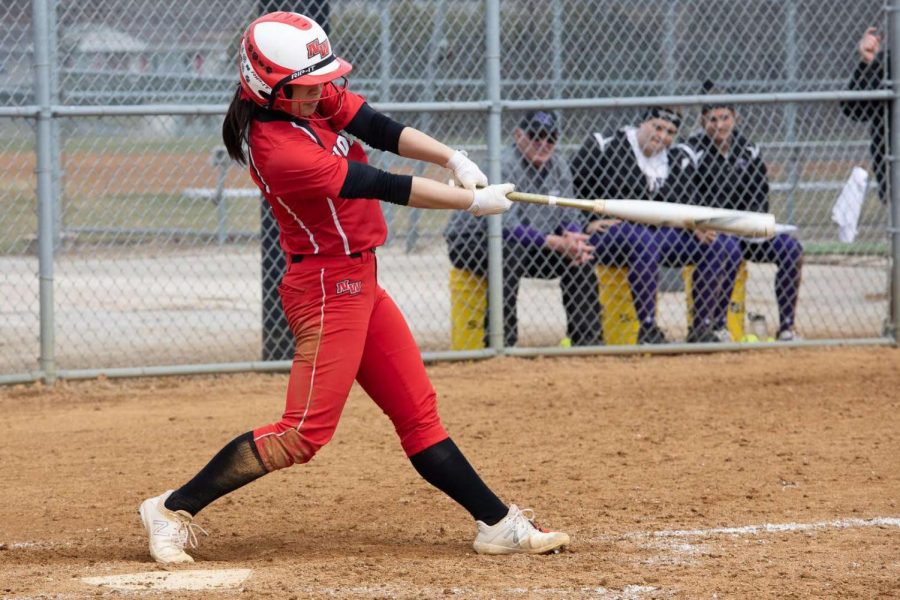 Junior Julia Ruth mid-swing during one of the softball games.

As winter sports start to wrap up their seasons and rest before off-season training, spring sports, such as softball, are dusting off their equipment and getting ready to start their seasons.

The Niles West softball team has already started preseason workouts, even despite the erratic weather we’ve been experiencing lately. The girls have managed to find ways to prepare for this season with team activities like indoor cardio, indoor hitting, and team bonding.

“There have been a lot of preseason workouts going on lately, which I think is awesome because it’s a great opportunity for us to kind of get going before official practices start. That way, we’re even more prepared for games do finally roll around in March,” junior team member Quinn Niedermaier said.

The Varsity team had a great 2019 season, ended the season off with a 13-14 record, and they won the regional championship, which is something they all had to work really hard for last season and is something they plan to work even harder for this spring.

“Because we won the regional championship last year, we really want to move even further up with our accomplishments this year and hopefully win the sectional championship,” fellow teammate and junior Gabby Rogan said.

Rogan doesn’t seem to be alone with this goal.

“As a team, I think our goals would be to try to get into the top three of our conference, possibly be the first. Also, we’re striving for the sectionals title, and I believe we can do it because we have a lot of returning players with a lot of commitment and promise. If we improve our defense and offense skills as a team, even more, I think we can go even further,” junior Naomi Greene said.

In spite of this success, the team remains reflective and focused on both strengths and weaknesses from last season.

“Our team last year was really good. Even though we had a couple of bad games, as a team, we really pulled ourselves together to win some important games like beating Maine South for the first time in my career, Loyola and Taft, for the regional title. Also, I would say our hitting didn’t disappoint. We had multiple home runs as a team and many hits,” Greene said.

Come support the girls at their first home game of the season on March 27 against Von Steuben.