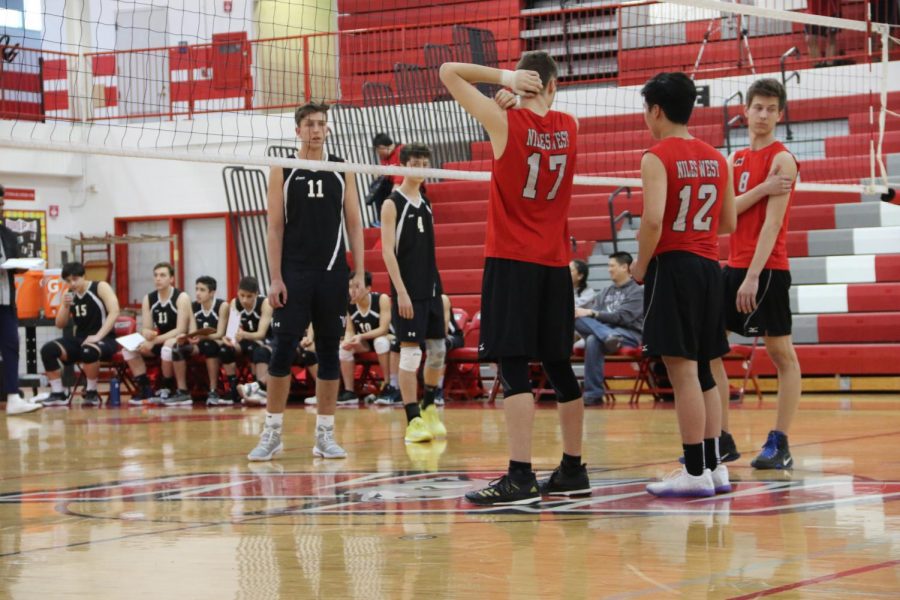 Niles West prepares for a new rally to begin.

With spring sports starting up again, it also means it’s time for the varsity boys volleyball to begin their impeccable record just like last seasons. After having an amazing run last season, the team plans on holding on to their traditions as well as stepping up their game to make it further in the league.

“Our typical goals are always to try and win each tournament, win conference, regionals, and go down to state as every team shares those goals,” head varsity coach Andrew Roche said. “For us individually, our goal is to make sure, we as a program, have a good cultural setting set in place so that everyone wants to be there and it doesn’t feel like a chore to be there on the court.”

Senior Kyle Moy is excited for the season as well as ready to welcome new members to the team.

“One thing I feel we have to work on this season is building chemistry with a new team and fill holes or positions left by last year’s graduating class,” Moy said.

To keep the spirit within the team and volleyball program alive, they also plan to expand and maximize the team’s work ethic and cooperativeness.

With Glenbrook North recently being added to the conference, the team continues to prepare for what the future holds throughout the season itself.

“I feel confident that with the new players on the team we’ll be able to still live up to our previous records, or even go further,” junior Sean Carey said. “Our top opponents this season are Glenbrook North and New Trier.”

Overall, the season will bring out the best in the athletes and be one of the most fun ones yet.

“We have some returning players that we expect big things from and some newcomers that we’re hoping will be able to make the jump,” Roche said. “I expect us to be highly competitive but the group of personalities we have this year at the varsity level is going to be a really fun group to work with.”

Don’t forget to see the team in action at their first game at Notre Dame on March 31 at 6:00 p.m.