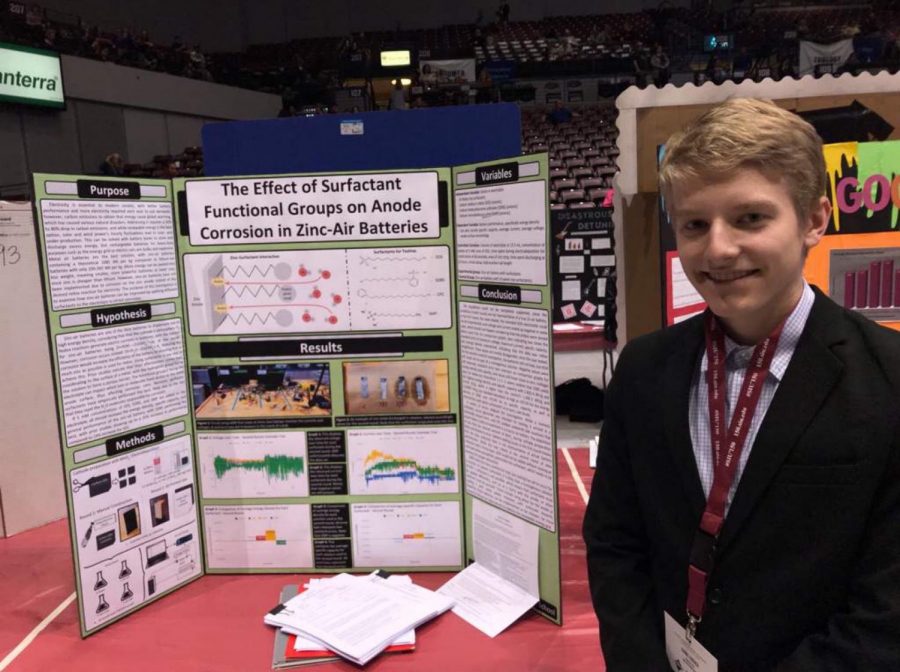 Walking around school, you can see how students attempt to be more environmentally conscious from by carrying using Hydro Flasks, reusable Lululemon bags, and recycling bins. However, it is less common to see students actively conducting research in an attempt to innovate sources of energy in order to benefit the environment. That is, unless you have met senior Daniel Cudzich.

Cudzich has always loved science and exploring. As a child, he was always reading science encyclopedias or watching National Geographic or science YouTube videos. His innate passion carried him to high school as he finally was introduced to high school level science classes. These science classes only increased his desire for knowledge, and to him, there is no better way to acquire knowledge than to do the research yourself on a topic you care about. It was during his freshman year that Cudzich fell in love with the Niles West STEM program.

Cudzich’s freshman year STEM project focused on how he could transform plastic into oil and come up with new recycling methods. Cudzich explained that he often runs into roadblocks with the limited resources he has at the high school level for the level of research that he wants to conduct. However, this challenge never stops him from coming up with new ideas for what he could research and try to change, and it was during his sophomore year that he began research that he is still working on today: how to make batteries more environmentally friendly.

This project only served as motivation to continue learning and inspiration for his junior year project which was also a new type of battery that actually brought him to state. Despite the many setbacks and challenges Cudzich faced during his research with this new battery, he was overall very pleased in the end at the state science fair.

“I ended up getting best in category at state as well as earning a happy sum of money from the science department for further research. I also submitted my project to Regeneron STS,” Cudzich said.

Cudzich not only made it to state but he also was recognized as one of the top 300 semi-finalists out of thousands of other students at an out of school science fair. For this science fair, Cudzich worked on innovating another battery in an attempt to have a battery with a longer lifespan that was also better for the environment.

With regionals coming up, Cudzich is continuing his research for a more efficient and environmentally friendly battery. Of course, there are many challenges as some energy methods are not realistic enough for long term use since there isn’t always sun or wind power, and he doesn’t want to create a battery with elements that would be toxic or expensive. Of course, these challenges never stop Cudzich as he simply sees them as opportunities to grow. He also is inspired by his love of chemistry and what he is doing for the planet.

This hard work and dedication is seen by teachers here at Niles West such as chemistry teacher Parin Patel.

“Daniel is a hardworking, intelligent and independent student. His work in the field of Chemistry and more specifically batteries has been incredible. He has been working hard to try to find a new method to make sure our cell phones stay charged longer and to make electric cars even more efficient,” Patel said.

Of course, Daniel could not have made it this far without his graduate student mentor, Austin Evans at Northwestern who also thinks very highly of Daniel.

“I’ve worked with Daniel for the past three years. During that time, I have always been impressed by Daniel’s curiosity and interest in a range of scientific disciplines. Scientific experimentation is a failure driven process, but Daniel takes his experimental results in stride and never loses his tenacity,” Evans said.

“The fact is that I really truly do love and enjoy chemistry at its deepest level because it is quite literally messing with the building blocks of nature. You could say that I’m smashing atoms to create new elements, but that’s not something I can do at the high school level,” Cudzich said.

Looking into the future, Cudzich plans on doing plenty of undergraduate research at whichever university he decides to attend in the fall. Some might be hesitant to jump right in and make themselves heard, but Cudzich shows no fear.

“Undergrad research might be a bit difficult because universities might focus more on graduate-level researchers, but I’ll never be afraid to finding some professor and saying ‘hey, I see you’re working on this research project, and I’d like to help,'” Cudzich stated.

To Cudzich, college will be all about accumulating experience in the research field even if he doesn’t pursue research after graduating. Regardless of what career he chooses, he will be able to implement the research that he has done into the companies that he plans to work for. As of right now though, Cudzich is interested in chemical engineering, but he knows that can all change as he attends college.