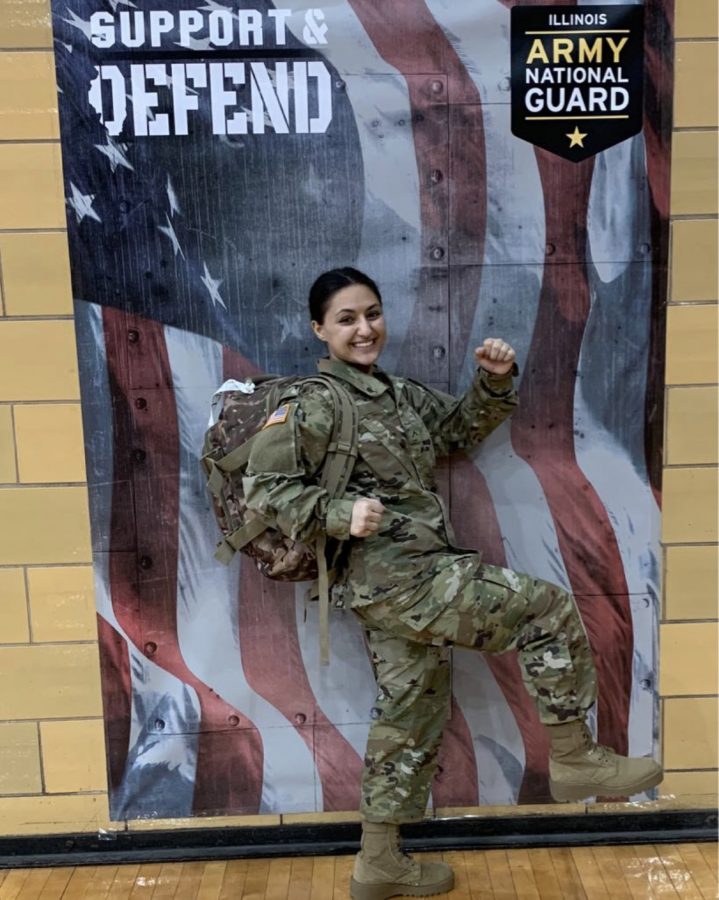 Senior Mary Hawel has been certain of a future in the military since she was six. Watching her mother singlehandedly raise her, Hawel knew she wanted to be the first in her family to go to college, and joining the military would give her the ability to pursue her goals.

In her sophomore year, Hawel decided she would have a future in the Army National Guard. She did her research and found out that she would only have to serve one weekend a month in the branch, so she would also be able to go to college.

“I could go to school and have a normal student life and then once a month, I would do my part as a soldier,” Hawel said. “The idea of serving and going out and protecting people makes me feel better.”

To apply, Hawel spent a day at the branch in Rosemont where she went through numerous medical exams and interviews, and eventually, learned of her contract and was able to sign.

Hawel trains one weekend a month at an armory with another group of future Army National Guards, where she is able to work out and incorporate small tactics to become a better soldier. This training helps her prepare for 10 weeks of basic training, which she will attend after graduation.

While Hawel is a little scared of officially starting as a soldier, she believes it will be easy for her to balance her soldier-student life.

“I think it will be easy just because it’s only weekend a month,” Hawel stated. “If anything interferes between my two commitments, however, I’m a soldier first, so the military is my top priority.”

As for her future education plans, Hawel wants to study law and see where it takes her.

“I definitely want to do something along the lines of social work and public policy,” Hawel said.

Hawel’s Spanish teacher, Luisa Karimighovanloo, believes that Hawel will transfer her academic strengths into her life as a soldier.

“I can see that she has strong convictions and is thoughtful, caring, and willing to help. As a future soldier, I am sure Ms. Hawel will bring all these personality traits mentioned, in addition to being a hard worker and having a very keen sense of empathy,” Karimighovanloo said. “Niles West will feel proud of her.”

Similarly, English teacher Tamara Jaffe-Notier is certain Hawel will make a great soldier based on her personality as a student.

“As a soldier, she will be tough, fast, and intelligent in any situation, as these traits are an inherent part of her personality,” Jaffe said. “She’s particularly good at making people who might feel like ‘outsider,’ at home. She welcomes new immigrants to our community with joy.”

If you see Hawel in the halls, don’t be afraid to say hi, wish her the best of luck, and thank her for her willingness to serve as a soldier.