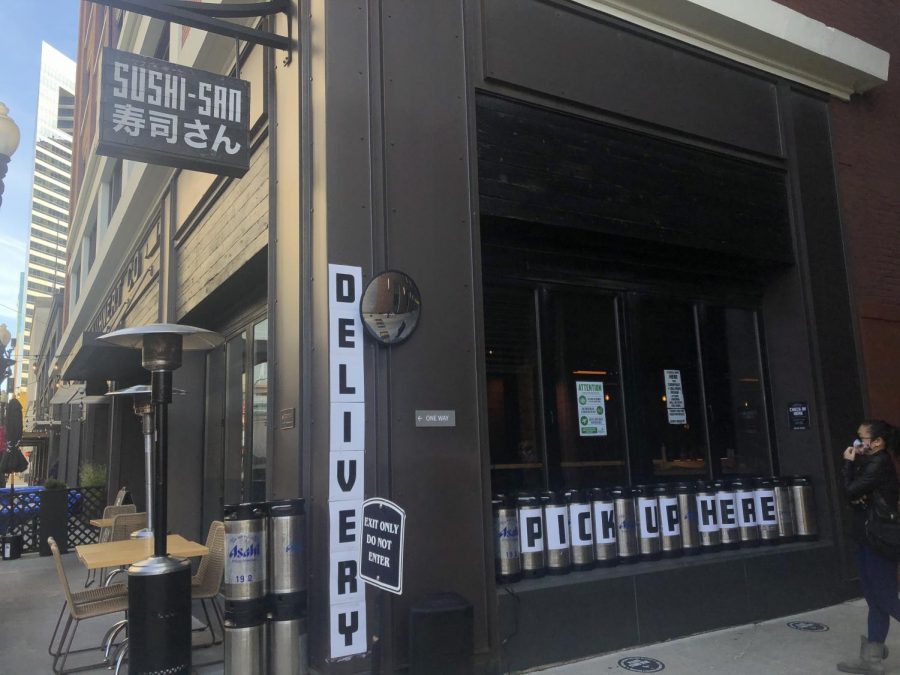 Pick-up station located on the side of the building.

Using fresh ingredients that are delivered daily from Japan’s Toyusu Fish Market, Sushi-San, located on 63 W. Grand Ave, may have some of the best sushi in Chicago. Some people are very skeptical when it comes to sushi due to its raw ingredients, but Sushi-San brings a whole new modern take on not just Sushi but also Japanese food.

All rolls are made-to-order, and you can even reserve the omakase experience, which is when you let the restaurant decide your order. My family and I usually tend to go to Sushi-San whenever we’re in the city; personally, my favorite part of eating at the actual restaurant is the vibe. I’m pretty sure that you can hear a mix of Notorious B.I.G, 2 Pac, Jay-Z, and any old school hip hop rapper from down the block, so don’t expect it to be quiet.

The sushi is sort of pricey, as it costs about $20-50 per person, but I think that it’s a really good price for the amount of food you get. One of the best deals offered may be the express lunch, which is $17 for miso soup, salad-san, your choice of san-specialty, and a rice bowl. Not only can you get sushi, but you can get actual meals, which offer a wide variety of charcoal-grilled dishes. They offer what they call “sizzling rice,” which adds a Japanese take on the Korean dish, bibimbap. Due to covid-19 protocols, they are only doing curbside pick-ups, but the quality of the food is exactly the same.

Out of the san-specialties, my favorites would have to be either the Tako Taco, Togarashi Chicken Nuggets, Miso Soup, or the Salad San. The Tako Taco is a spicy octopus with crushed avocado inside of a crispy nori shell. The Togarashi Chicken Nuggets is such a good additional appetizer if you’re feeling extra hungry. Out of all the rolls, my parents’ favorites are the spicy tuna and the spicy scallop; personally, I don’t like spicy foods, so I typically aim to avoid spicy rolls.

If you’re looking for an actual meal instead of sushi, then my favorite was the miso salmon. It’s a Faroe Island salmon, marinated with sake, miso, and mirin, then grilled over a binchotan charcoal. The flavor that you get from the dish is so rich and extraordinary that it’ll soon become your go-to. You can also select the miso salmon as your rice bowl if you order the express lunch.

By now, if you aren’t full, they also offer dessert. Let me tell you, if you know my family, you know that dessert isn’t an option but an obligation. At Sushi-San, you can get the Japanese breakfast, which is one of the delicacies in Japan, fluffy pancakes. They are these large, fluffy, and light pancakes topped with matcha butter and black sugar. They also offer ice cream, which is switched up every week, but my favorite has to be the matcha oreo. Its matcha ice-cream with oreo mixed in and topped with marshmallow fluff, caramel, and a light layer of chocolate fudge. Typically when they’re open, it comes in a cone, but since it’s curbside pickup, they put it in a cup, making it 100 times cleaner than how it usually is. Another good choice for dessert is their “Emochi”; it’s mochi, which is a rice cake paste with ice cream inside. They have multiple different flavors that get changed around, and each emochi has a fun different emoji face.

Sushi-San is the perfect place for people who are new to sushi and are willing to try it. Also, a couple of streets down on 59 W. Hubbard St., you’ll hit their sister restaurant, Ramen-San, it’s the same exact vibe, but this time it’s with Ramen. Sushi-San is a great restaurant, which is the reason why I would rate it a ten out of ten. If you’re ever in the city and stop by, this is definitely the place to go.