The Phenomenon of Chess: The Queen’s Gambit 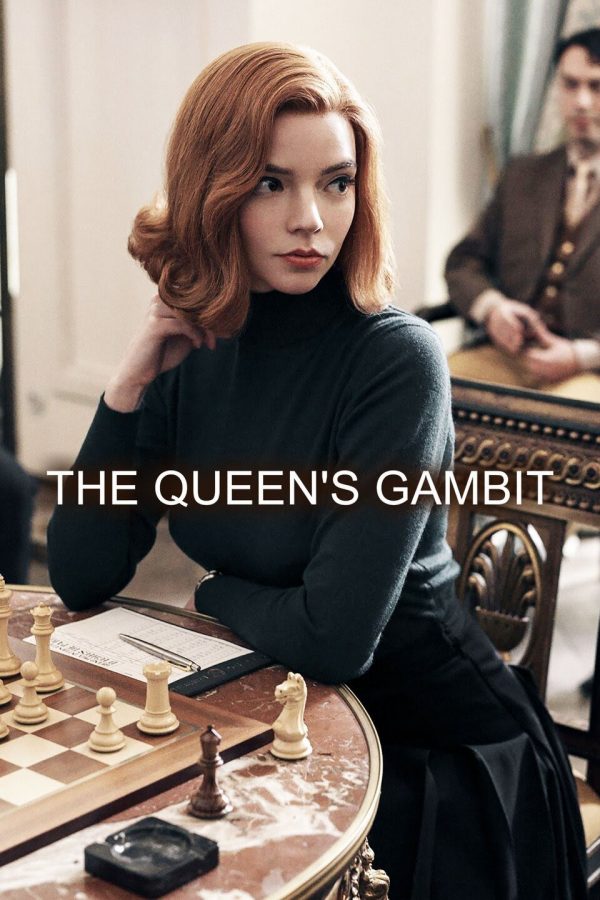 Based on Walter Tevis’s 1983 novel, the seven-episode miniseries captured the attention of chess fans from all around the world. Set during the Cold War era, Netflix’s original miniseries, “The Queen’s Gambit,” was released on Oct. 23.  As the storyline continues, you follow the life of Beth Harmon, played by Anya Taylor-Joy, from the age of eight to the age of 20, rising to become the best chess player in the world.

At the age of eight, Beth gets sent to an exclusively-female Christian orphanage where she befriends fellow orphan Jolene. Jolene, played by Moses Ingram, is able to help Beth navigate the new rules and standards of living at the orphanage. Eventually, Beth runs into the custodian, Mr. Shaibel. played by Bill Camp, in the basement, who sparks Beth’s new love for the dominantly-male game of chess.

Every day, Beth sneaks to the basement to play chess with Mr. Shaibel, who then starts to realize how extremely talented Beth is. Beth becomes a well-known prodigy in the chess-world and begins to join tournaments, where she builds up to her most important game against her fiercest competitor, Russian grand-master Vasily Borgov, played by Marcin Doroinski. She also starts to befriend some of her past opponents, like Harry Beltik, played by Harry Smelling, and Benny Watts, played by Thomas Brodie-Sangster, who both play important figures in her life.

A relationship that I really loved yet hated was Beth and her adoptive mother, Alma Wheatly, played by Marielle Heller. I think it was really beautiful how the directors played out their whole story. Their relationship isn’t a typical mother-daughter relationship, but as you continue to watch, they are both able to offer a different piece of perspective to each other’s lives.

Since her whole world revolves around chess and only chess, Beth starts to realize that life is bigger than chess. From the start to the end of the series, you watch her see chess as a passion rather than an obsession while dealing with problems of drug and alcohol addiction and trauma from her childhood, especially her mother’s death.

The script was more focused on how Beth shapes the world rather than how the world has changed Beth, which made the script so beautifully unique. It really highlighted a realistic standard of a young girl growing up, without her experience being skipped right to adulthood.

The series was intense and interesting, and it’s a show that you need to binge-watch all in one day. I would rate this show an eight out of ten just because, for me, it was a little slow, but it was still able to keep me on edge. The series is really well filmed, and I think actress Taylor-Joy, was able to represent everything that Beth was going through and made the series very vivid and artistic.

Director, Scott Frank, made a really well scripted and performed show. When starting the series, you would expect it would be boring because it’s about two people moving wooden pieces around on a board, but the show really is for anyone. It brings up ideas of dealing with addiction, sexism, and trauma, but it’s truly about a young girl making choices on and off the chessboard. The ending was incredibly heartwarming and may even be a tearjerker to some. I highly recommend watching this series as soon as possible.