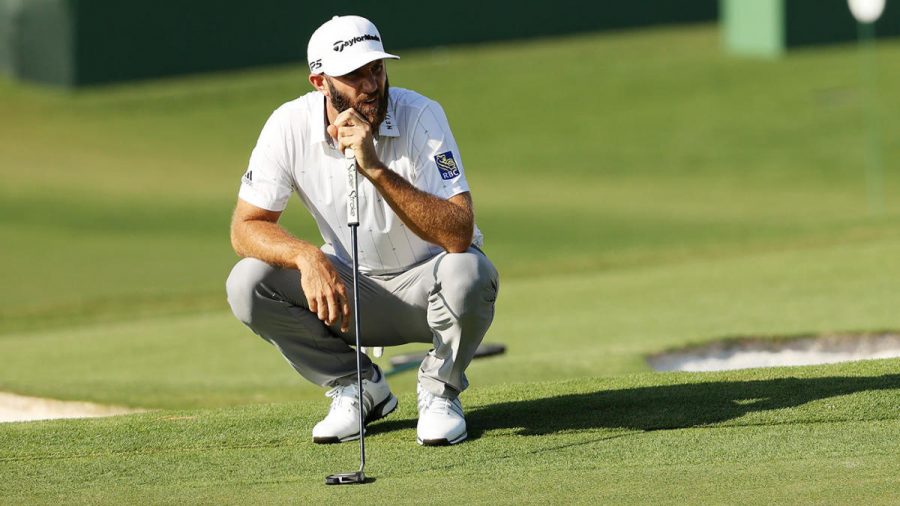 Dustin Johnson during the 2020 Masters.

Wrapping up the 84th Masters on Sunday, Nov. 15, 2020, the three-day tournament ended up with Dustin Johnson taking home the Green Jacket. The Masters is one out of the four major championships, generally taking place the first week of April at the Augusta Golf Club in Georgia. This year was a little different with the tournament being delayed seven months and taking place in mid-November.

Before the tournament started, the most anticipated players other than Johnson were Bryson DeChambeau, Jon Rahm, Rory McIlroy, Justin Thomas, Brooks Koepka, and of course the 15-time major, champ Tiger Woods. So, what really happened during the Masters?

From the start, DeChambeau’s performance was not what people were expecting. Coming into the Masters it was believed that his competitive nature and sharp game would’ve landed him a spot between 1-10. Instead, he ended up tied for 34th place ending with a total of -2. His past couple of tournaments have been played phenomenally especially his six-shot rout at the U.S Open in September, but the most disappointing rounds during the Masters were when he double-bogeyed the 13th hole in the first round, and triple-bogeyed the par-4 third hold in the second. DeChambeau claimed to be dealing with multiple health issues one of them being abdomen pains and dizziness on the course. There is no current explanation for his health so far; he has tested negative for Covid-19.

One of the top ten finishers was Koepka who tied for 7th with a total of -10. In the beginning, it was a little rough, for his first 14 holes he was 2 over par. In the opening three rounds, he totaled 70-69-69, which was eight under. Through the third and fourth round, he started to have a comeback but just fell short. One of the highlights was on the 15th hole, where he had made a 7-foot eagle putt. Although he finished in the top 10, he was not happy with his results claiming in the Sunday flash interview, “Yeah, I’m not really excited right now. Whoo, seventh.”

McIlroy was hoping on taking home the green jacket to add Grand Slam winner to his title. Unable to find consistency in the first round, hitting only six of 14 fairways, he was able to make up for it in the later rounds, ultimately finishing T-5. Then there was Woods, placing T-38, his performance at the Masters may be the most disappointing ever in his career. The 12th hole disaster will for sure leave him wondering what he did wrong. For fans, it was embarrassing to watch him find the water three times during the 12th hole while carding an overall 10 on a par-3 course. One of the highest of his career.

Cutting to the end of the Masters, Dustin Johnson had an amazing run. Winning the Masters and setting a historical 72-hole scoring record of 20 under was the biggest victory of the night. Throughout the three-days, he played really consistently solidifying his overall game. Tied for second place were Australian, Cameron Smith, and Korean, Im Sung-Jae with a total of -15.

Johnson who grew up just over an hour away from the Augusta national, ended up on an emotional note. Having to stop multiple times while being interviews by CBS’ Amanda Balionis, Johnson couldn’t keep it together. He now has two majors, 24 PGA Tour wins, and a green jacket.

Since the Masters was delayed seven months to November, golf fans only have to wait five more months till the 2021 Masters. The 2021 tournament will begin on April 5 and end on April 11, 2021.