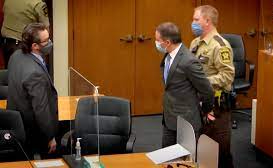 At 4:05 PM on Tuesday, April 20, the world watched as the verdict was read, and Derek Chauvin was found guilty of the death of George Floyd on three charges: second-degree unintentional murder, third-degree murder, and second-degree manslaughter.

“I would not call today’s verdict justice, however, because justice implies true restoration, but it is accountability, which is the first step toward justice,” Minnesota’s attorney general, Kieth Ellison, spoke after the verdict was announced.

This verdict came after a three-week trial. The prosecution presented that Chauvin’s use of force was excessive and caused Floyd’s death. The prosecution featured multiple witnesses from the Minneapolis Police Department. The defense argued that George Floyd died from an enlarged heart, both fentanyl and methamphetamine in his system, and potential carbon monoxide. Floyd’s death was ruled a homicide.

Cities around the world reacted to the news. Many feared that Chauvin wouldn’t be charged because he is white. People are hoping that this verdict will send a message to law enforcement officers and bring the start of change for people of color in the justice system. Crowds gathered in Minneapolis, where Floyd died, and rejoiced when the announcement of Chauvin’s conviction came out.

“Chauvin was not one bad apple. You have a system that preys on marginalized communities and African Americans, and the only reason that he was convicted [is] that it was live and people saw it all over the world,” Gary McCollum, a local minister from Virginia Beach, said in an article for NPR.

People are hoping that this verdict will be seen as a systemic issue in the world, rather than just a criminal justice issue. In Houston, people watched from a mural close to where Floyd grew up. There, people are hoping that this will force city officials to look into the police violence in Houston. Philadelphia has adopted new measures to increase police accountability and prevent the use of excessive force.

Locally, students at Niles West are reacting to the news of Chauvin’s conviction.

“The verdict for Derek Chauvin was half justice. Although he has been charged guilty, the fight is not over, because black lives are still being killed by police brutality. Full justice is obtained when there is legislation for police reform. Only then will I think we have achieved justice for George Floyd and his family,” freshman Derek Kyan said. “Future cases involving BIPOC will be determined by the precedent of the verdict of Derek Chauvin. That this was murder and there was no excuse for the killing of George Floyd because everyone watched the truth with their own eyes.”