Girls Tennis – Ending the Season on the Right Foot 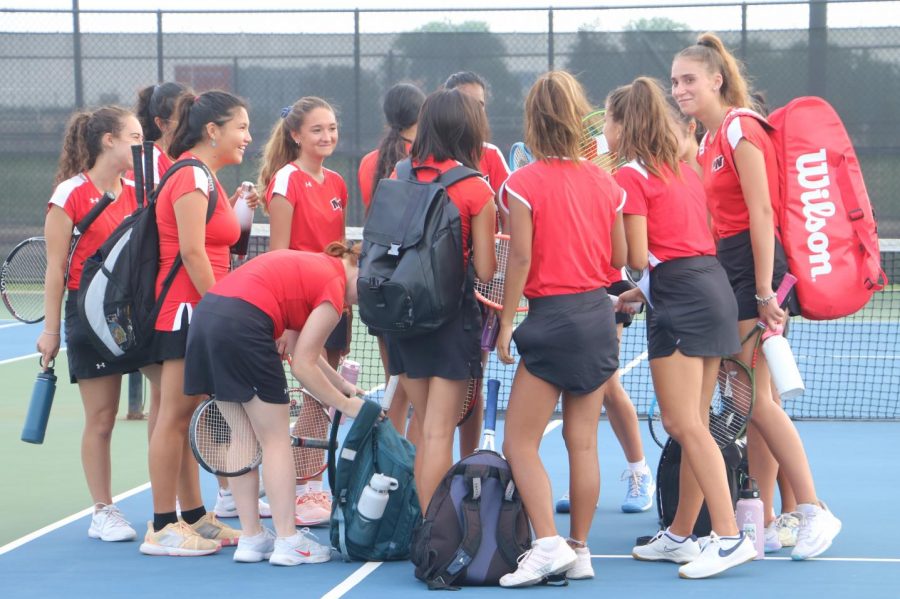 The team prepares before they break up for their matches.

As the girls’ tennis midseason has just passed, let’s take a look at their performance.

According to varsity coach George Bravos, the team has had a great start, winning seven of their eleven games.

The team as a whole has had much success, and so have individual players.

Sophomore Katarina Pljevaljcic, who plays doubles, believes that she has improved this season.

“Best match would definitely be my second game at my tournament last weekend. I played very well and made three ace serves. I was hitting very well and my energy and confidence was high which made me play better,” Pljevaljcic said.

Of course, all success comes with some work. Before reaching this point, Pljevaljcic admits that, at first, she had a little trouble serving.

“Before the season and during the start of the season, when I served, I would drag the toe of my shoe on the ground. I went through THREE pairs of shoes because they all ripped due to my silly mistakes. Now I learned how to properly drag my foot when serving and my shoe isn’t ripped!”

Junior doubles player Lorraine McDonald has also experienced some obstacles during the season.

“A challenge this season has been playing well through the ends of matches as well as tiebreakers; Paige and I have played quite a few this year.”

But the team is still hopeful for the future, ready for greater challenges and new experiences.

“I’m really looking forward to conference weekend. It has been a lot of fun the past two years and it’s one of the highlights of the season,” McDonald said.

“I’m looking forward to making more memories with my favorite team. My coaches have been the best and always support us when we win or lose. They know what to say and how to say it when we are getting down on ourselves,” Pljevaljcic said.

Their next game will be at Glenbrook South on Thursday, Sept. 30.