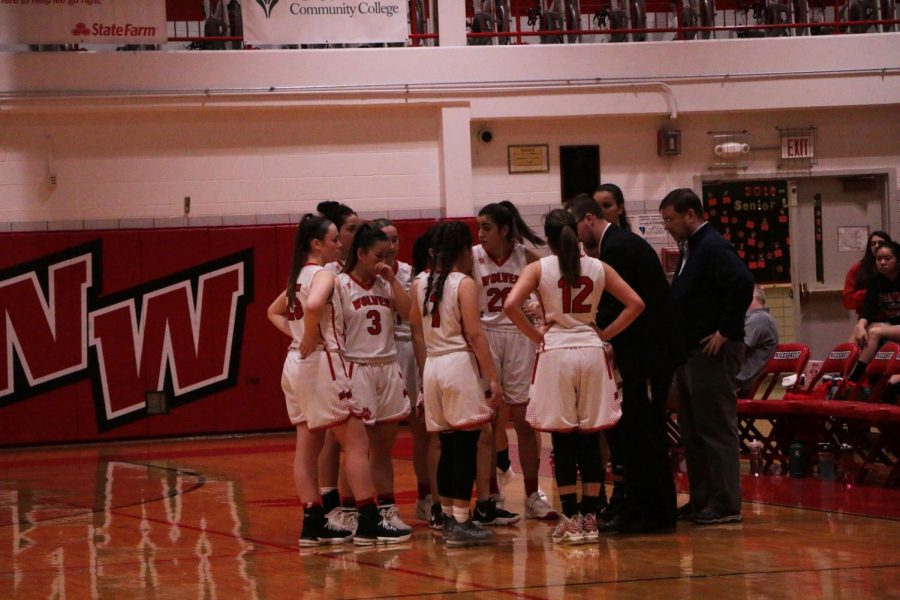 Varsity girls basketball huddling together during a timeout to discuss their strategy to win.

With the holidays quickly approaching, the Niles West girls basketball program looks forward to a season full of improvement and wins. After a 1-3 start to the season, the team has high hopes while going up against a tough Northside squad after Thanksgiving.

“We have a good group this year. We have a strong number of younger players, but we also have great leaders on and off the court. It’s gonna be a good season full of development and growth nonetheless,” senior captain Abbey Adams stated.

Head girls varsity basketball coach Kyle Braheny noted how important improvement is for the team this season after the first couple of games.

“I feel good, it’s not perfect and it’s not gonna be perfect, but we want to see improvements. The first game I felt like we were nervous, kinda rushed at times. We talked about those, and my message was, let’s improve from this game to the next game. So we lost a close one in the first game, but we bounced back against Antioch with a nice win, it was a good character win.”

Gaining experience for this young team is something that’s very important to Braheny.

“The expectation is that this young group of players is getting better and gaining experience every single game. I just want to see us improve throughout the season, I want us to have high effort every single game, I want us to be the scrappy team that no one wants to play. Expectations being we are that team, we keep building on that effort and then the wins will come. I wanna say if we do the right things and we do the expectations were supposed to, those wins will happen,” Braheny said.

The team has a perfect mix of underclassmen and upperclassmen to create a unique team.

Junior guard Aashi Shah noted how important getting wins early can be for the team.

“I think getting wins in the beginning of the season sets the tone for the rest of the season. It shows us where we need to improve to become the team we want to be,” Shah stated.

Come catch the ladies in action Saturday in a non-conference matchup against Northside at 12:30 p.m. in the contest gym.