“Pippin” Shocks Audience with Its Message 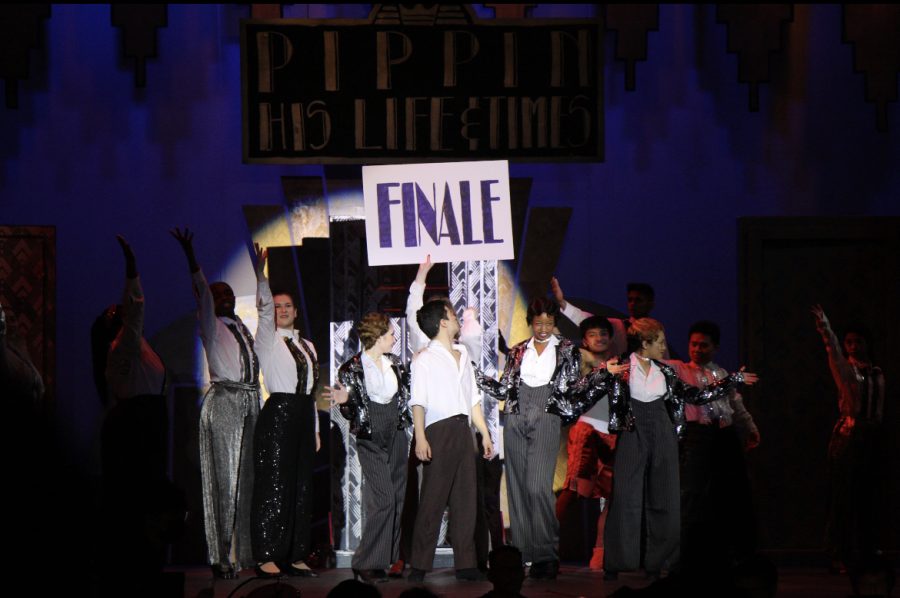 The show must end off with the big and extravagant finale.

Many students attended the “Pippin” musical on April 28 and 29 in the school auditorium. The play is about a young prince, played by senior Jake Pranian, who doesn’t want to waste his life on simple things. He also wants to prove his loyalty to his father, King Charles, played by junior Simon Solano. Before watching the musical, I was nervous about whether or not I would like the performance, but here is my input.

The first act consisted of Pippin, the firstborn son of King Charles, coming home from the University of Padua. To find adventure in his life, Pippin asks his father if he may fight in the war, to which his father hesitantly grants permission. After walking past all of the dead bodies after a battle, Pippin realizes war is disgusting. This leads him to talk with his grandmother, Berthe (played by junior Meghan Eslick), who enjoys her simple life. While talking about his frustrations, other characters come in to tell Pippin about how his father killed their own people. Ashamed, Pippin disguises himself, and when his father is alone, he kills him.

I love how the leading actors add character to the show, allowing the audience to have a better understanding and more information on what the scene is about. This act is also very insightful as well — for example, when Pippin becomes king and both the rich and poor come to him with questions, he grants the peasants their own land and the rich no taxes. When doing this though, Pippin has no way to have an army, which will make his kingdom fall.

The second act consisted of Pippin trying out different jobs and activities to make his life more thrilling, but because none were to his liking, Catherine (played by junior Ellie Evens) finds him. She is a widow with a son who lives on a large estate. She helps him out and asks him if he wouldn’t mind helping her run her estate by doing chores for her. Over time, he develops feelings for Catherine.

The musical is honestly very funny in my opinion. When Catherine and Pippin were talking, the leading players made Catherine “retry” the line again because the way she said it did not have enough despair in it. There was also a part where Catherine’s son, Theo, was playing his broken flute and the sound came out very high pitched, which was humorous. Another part that made me laugh was when Pippin got Theo a dog. Because Theo wanted a duck, however, he goes, “That’s not a duck, dumbass,” even though he is young.

The little details also made a big impact on the musical. For example, posters were brought out in different scenes with different sayings which added a nice touch. The scenery created a good perspective on where the setting was being placed. I loved the fake vines being brought down above the curtain. I absolutely loved the extra attachment to the stage where the actors were allowed to walk around the orchestra, but were still connected to the stage.

Honestly, I have no real complaints about the show, except that I came on the day the live dog was not attending. This was pretty upsetting since I wanted to see the dog perform on stage. Overall, the musical was educational and entertaining. The humor the actors brought on stage made “Pippin” even more enjoyable. I’d rate the musical a 9/10.