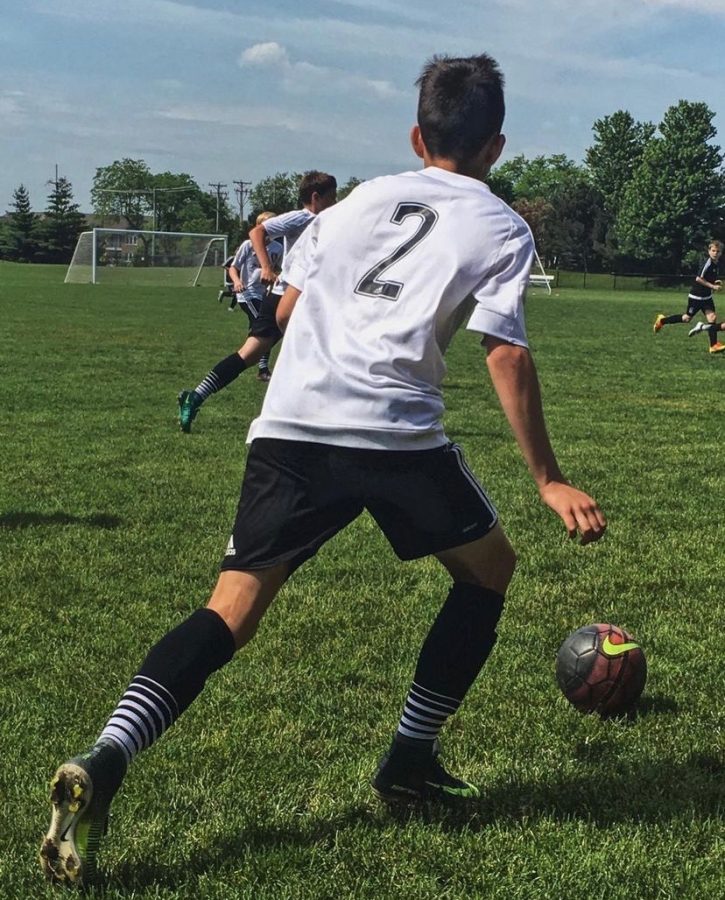 Baxevanakis making a pass to his teammate.

Evan Baxevanakis: Going For The Goal

Sprinting down the field like lightning, junior Evan Baxevanakis kicks the ball and scores a goal. Baxevanakis has been playing soccer since the moment he could walk.

Starting at the age of six, everyone knew that Baxevanakis would be successful. Though Baxevanakis can play other sports like basketball, soccer has always been the sport he has had a true passion for. Making varsity his first time trying out, it was no doubt that Baxevanakis holds a lot of talent on the soccer field.

Being such a hard working athlete, Baxevanakis dedicates a lot of time to practice. “My favorite drill in practice is mostly anything that has to do with dribbling”.

“My teammates mean everything to me because you can’t win anything by yourself, and having teammates by your side is important,” Baxevanakis said.

Being a sophomore on a senior heavy varsity soccer team, Baxevanakis was ready to work his hardest. In the summer of 2021, Baxevanakis tore his ACL and had to get surgery the following August. Though this injury was very serious and one that held him back, Baxevanakis is more motivated than ever to return to play and train as soon as possible.

“Even after his injury, my brother continues to work hard in soccer by strengthening his knee and legs in order to come back playing stronger than he was before,” Baxevanankis’ sister Despina Baxevanakis said.

Starting physical therapy in August, Baxevanakis began to get his strength back. “The reason I injured myself is because my body wasn’t strong enough and I was only going through the motions, when I tore my ACL. It affected me negatively because I could no longer play, but also affected me in a positive way because I shouldn’t take anything for granted and give it my all,” Baxevanakis said.

After the injury, a main goal of his was to focus on school and family life, and start physical therapy as soon as possible after surgery.”My goal is to work through physical therapy and get back on that field,” Baxevanakis said.

“My favorite memory was when I subbed in for my first game for varsity, it was my first game but it felt good getting out there.” Baxevanakis said.

Not only does Baxevanakis play for Niles West varsity soccer, but has also played club soccer his entire life.

After Baxevanakis overcomes his injury, it is no doubt that his hardworking mindset and talent will make him a stronger player on and off the soccer field.